In efforts to inspire confidence in cross-border travel amid the pandemic, Singapore is rolling out a tamper-proof digital system which captures an individual's Covid-19 test results - and soon, vaccination records.

The IQcert portal is compliant with GovTech's HealthCerts - an open-source scheme and set of standards to ensure that the digital certificates can be widely recognised at local and overseas airports.

The portal is owned and developed by Innovative Diagnostics and Quest Laboratories, which will be merging to become the largest independent lab here, called Innoquest Diagnostics.

The two labs assess Covid-19 samples provided by more than 400 general practitioner (GP) clinics here authorised by the Ministry of Health to conduct such tests.

From March 10, all clinics authorised to perform PDTs for outbound travellers will have to issue digital test result certificates.

Clinics can issue the digital certificates via the IQcert portal, or they can buy technology from approved vendors to do so.

"These digital PDT certificates will smoothen and expedite check-in processing and Customs clearance at foreign and local immigration checkpoints, especially as Singapore ramps up travel for both inbound and outbound travellers," the ministry had said in a circular on Jan 21. 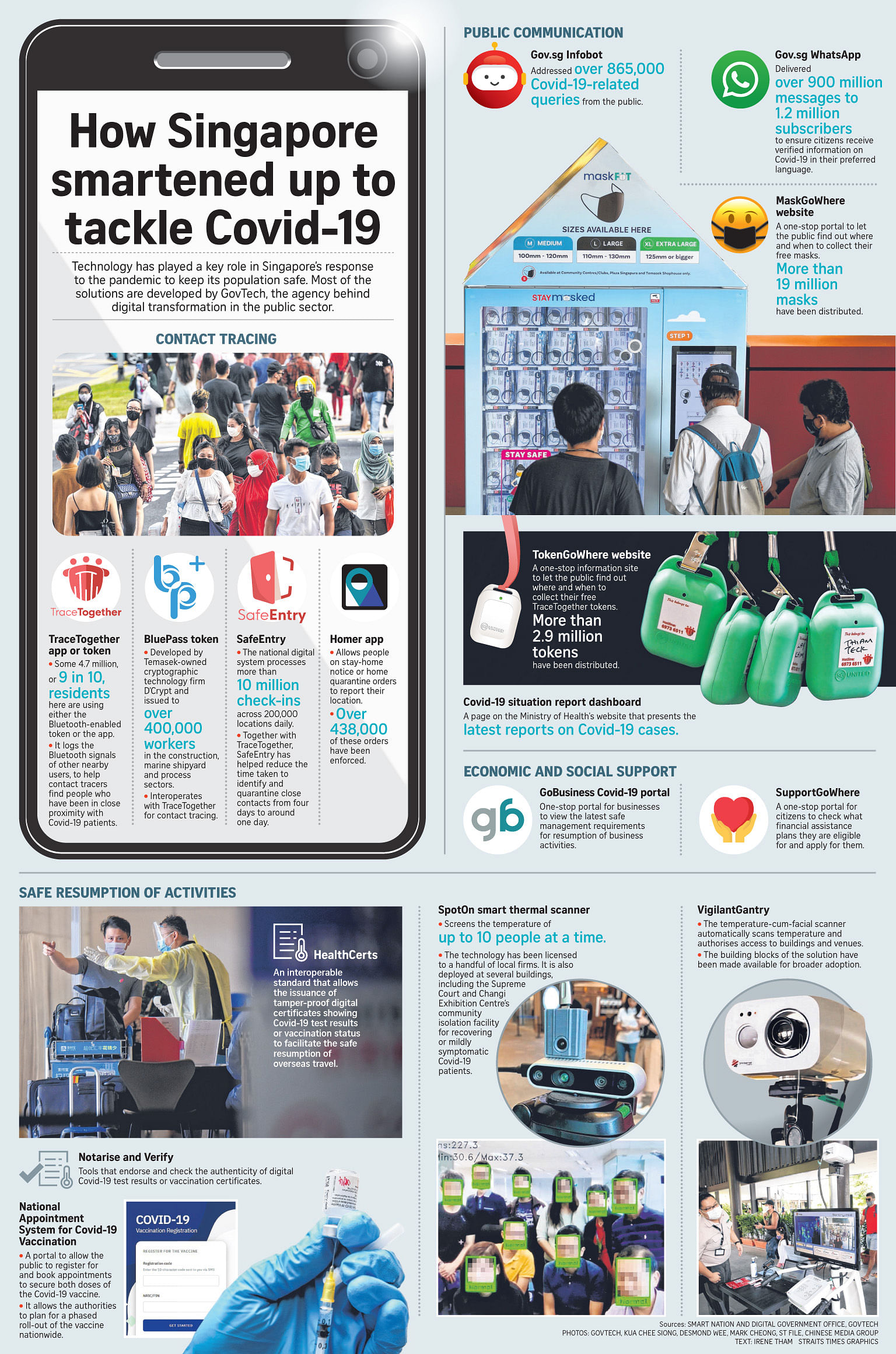 With cases of fake polymerase chain reaction test results reported in France, Spain, the Netherlands and Britain, the European Union's law enforcement agency Europol has warned that the problem will persist as long as travel restrictions remain in place.

The introduction of a digital certificate here complements a separate trial which has been running since December last year, involving inbound travellers from Jakarta and Kuala Lumpur on Singapore Airlines (SIA) flights.

Travellers from the two cities have to undergo a PDT in selected clinics abroad, which then issue digital certificates.

SIA's process is based on a separate Travel Pass framework by the International Air Transport Association (Iata).

The Iata Travel Pass, a digital platform which contains information on passengers' Covid-19 health status, is part of efforts to reopen borders without quarantines and revitalise aviation.

The Straits Times understands that plans are under way to allow HealthCerts to interoperate with Travel Pass.

Ms Ginny Foo, chief executive officer of Innovative Diagnostics and Quest Laboratories, said the digitalisation effort in Singapore is aimed at eliminating paper-based documents, which can be easily misplaced or altered.

Checks at immigration to spot such fake documents are laborious and unproductive, she noted.

"There had been international media reports of fake Covid-19 test result paper documents presented at airport immigration in Europe, America and Asia," she added.

HealthCerts' digital certificates are tamper-proof and built on blockchain technologies which involve the use of decentralised digital databases containing information about transactions that is visible to all in the chain.

The IQcert portal is based on Canadian blockchain firm Trybe.ID's technology, which is HealthCerts compliant.

Minister-in-charge of the Smart Nation Initiative Vivian Balakrishnan, who is also Foreign Minister, told Parliament last week, during the debate on the Prime Minister's Office budget, that the Republic will look into extending Health-Certs to cover vaccine certificates.

However, no timeline was mentioned.

To issue digital certificates, clinics can either pay to have a HealthCerts-compliant supplier install the technology, or tap a laboratory equipped with the technology.

Dr Eric Chiam, chief executive officer of the Minmed chain of eight clinics here, which are authorised for PDTs, said having the Quest laboratory integrate HealthCerts into the entire Covid-19 testing workflow saves clinics the hassle of buying and installing technology.

"In the absence of this service, we would have to shop for our own vendors, bear the charge for that, and integrate a separate platform into our workflow," he added.

These digital PDT certificates will smoothen and expedite check-in processing and Customs clearance at foreign and local immigration checkpoints, especially as Singapore ramps up travel for both inbound and outbound travellers.

THE MINISTRY OF HEALTH, on digital pre-departure Covid-19 test certificates.

"This is because the IQcert portal pulls patients' personal data from official sources," he added.

After logging in to IQcert to verify travellers' personal details, clinics can issue digital PDT certificates from the portal.

Upon receiving a digital certificate via e-mail, travellers will have to get MOH to certify it by uploading the document to the Government's Notarise website (http://www.notarise.gov.sg).

A notarised digital certificate containing a QR code will be sent to the traveller's SingPass Mobile app or e-mail address.

Airline and immigration officials can scan the QR code to check the authenticity of the record.

"Only a hash, or digital fingerprint, of the digital PDT certificate is published to the blockchain upon issuance," it added.

"Only this hash is needed to check the authenticity and validity of the digital PDT certificate."