SINGAPORE - Customers on telco StarHub's unlimited weekend postpaid plan will now be able to enjoy faster 4G mobile broadband speeds of up to 1Gbps, a jump from 400Mbps, in selected areas such as town centres.

At 1Gbps (1 gigabit per second), a consumer can download a 15GB Blu-ray movie in about two minutes. The previous top speed of 400Mbps (400 megabits per second) would mean such a movie would take more than twice as long to download.

StarHub on Friday (April 6) launched its high-speed network, which can allow users to hit theoretical maximum speeds of 1Gbps. But typical speeds consumers will get are lower at between 60Mbps and 380Mbps. This is compared to the typical download speeds of between 30Mbps and 201Mbps for the previous 400Mbps peak download speed.

Other telcos are also in the 1Gbps battle. Singtel said in February that it will be progressively rolling out 1Gbps mobile speeds for users in high-traffic locations such as Orchard Road, Raffles Place, Tanjong Pagar and Clarke Quay. Handsets supporting the higher speed on its network are expected to be available from the second half of 2018.

M1 said in a report in January last year that with its heterogeneous mobile network – that lets users hop between 4G and Wi-Fi networks – users will be able to theoretically enjoy up to 1Gbps speeds. The telco has already launched the network.

But an M1 spokesman emphasised on Friday that the telco’s focus is “on user experience rather than just theoretical peak speeds”.

StarHub said that at 1Gbps, customers will be able to experience improvements in mobile service quality and enjoy mobile Internet speeds of up to twice as fast as before, even as data traffic surges.

The telco's 1Gbps network was first deployed at TheFloat@Marina Bay in August last year to service attendees of the National Day Parade.

Friday's launch has the network cover more high-traffic areas, including the Central Business District, shopping districts such as Orchard Road and Clarke Quay, as well as town centres within the heartland in Bedok, Bishan, Chinatown, Clementi and Tampines.

StarHub is expected to expand coverage to other high-traffic locations later, based on incoming network traffic insights. 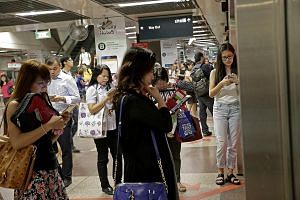 The move comes as part of an effort by the local telco to modernise its network, as key industry players move towards even faster 5G mobile networks, which are expected to be rolled out in 2020. Speed-wise, 5G networks will have download speeds exceeding 1Gbps.

Said Mr Chong Siew Loong, StarHub's chief technology officer: "Amid the growing appetite for mobile data, we are maximising the use of our spectrum assets for customers to enjoy enhanced network speed and service quality before 5G arrives.

"By pushing the boundaries of technology in collaboration with Nokia, we want to bolster Singapore's standing as one of the world's fastest, smartest and most connected countries."