SINGAPORE - Almost all credit and debit card users in Singapore can now tap and pay with their mobile devices.

Like the ez-link stored-value card and Visa payWave credit and debit cards, Apple Pay uses the wireless near-field communication technology to transmit data between the mobile device and a contactless payment reader.

Here are six things to note about your new payment experience. 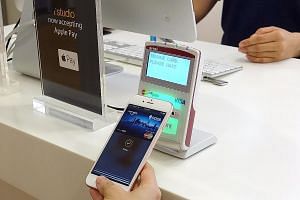 You must first add your card details to a digital wallet stored on the iPhone, iPad and Apple Watch. Supported handsets include the iPhone SE, iPhone 6, iPad Pro, iPad Air 2 and Apple Watch paired with iPhone 5 or later.

To set up, click on the "wallet" app in the device, then select "add a card".

Position the credit card you want to add in the picture frame on screen.

The 16-digit number will be automatically captured. Then enter the card's expiration date and CVV number. The bank which issued the card will also send an SMS with a six-digit code, which must be entered into the setup screen.

Voila, you are ready. 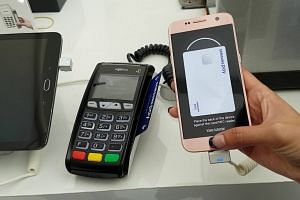 Samsung Pay e-wallet to launch in Singapore on June 16

2. Make sure your card is issued by these banks

The five banks' Visa and MasterCard credit and debit cards can be added to Apple Pay.

Amex cards issued by the same banks are not supported.

The Straits Times understands that banks have to install new, separate back-end systems, such as those that verify transactions, to support the various networks - Visa, MasterCard and Amex. Some costs are harder to justify.

3. Tap your finger to pay

To pay, hold the phone close to the contactless reader. Place your finger on the iPhone's or iPad's fingerprint sensor as your fingerprint is needed to authenticate every transaction.

Apple Watch users need only tap the watch - which must be worn by the user - on a contactless reader.

There is a $100 cap on most transactions. But UOB has lifted the $100 cap for its merchants, such as Singapore Petroleum Company, Caltex, Metro and The Coffee Bean & Tea Leaf.

Contactless payment is accepted at a total of 30,000 retail points here, including ComfortDelgro taxis, FairPrice and Cold Storage supermarkets, as well as Guardian, Starbucks and Uniqlo outlets.

5. Don't panic if you lose your credit card

If users lose their phones, the security of their plastic cards is not compromised.

This is because the 16-digit number on the card is not saved on the phone. What is stored instead is the encrypted version of a unique digital identifier, created based on the actual credit card number.

If a user should lose a phone, there is no need to call a bank to deactivate a card. He just needs to turn on "Lost Mode" under "Find My iPhone" in the iCloud account to deactivate Apple Pay.

6. What you can do while waiting for a replacement card

If users lose their physical credit card, they can still use Apple Pay as the virtual version of the lost card is not compromised.

This will be useful as an interim solution while users wait for their replacement credit card to be issued.

After users receive their replacement credit card, they can delete the virtual version of the lost card from Apple Pay and add the replacement card.