While the Note9's design is not a significant refresh from its year-old predecessor the Note8, Samsung has boosted the specifications to cement the device's appeal among power users.

Battery life, storage, speed and processing power have all been upgraded to exceed or match its competitors, with Samsung's mobile honcho DJ Koh saying the Note9 is designed "for a level of performance, power and intelligence that today's power users want and need".

The 6.4-inch Note9 uses a 4,000mAh battery, up 21 per cent in terms of battery capacity from its predecessor, Note8. It is said to be able to last the entire day from morning to night.

In addition, Samsung has doubled the internal storage of Note9 from its predecessor with a basic 128GB model and a high-end 512GB model. Expandable via a microSD card, the Note9 could go up to 1TB in terms of storage space.

Samsung has also upgraded its S Pen stylus. For the first time, the S Pen comes with Bluetooth support allowing users to use the stylus to remotely control the camera for selfies, present slides and play a video. 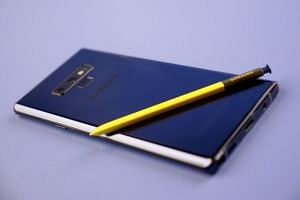 In terms of cameras, an increasingly important differentiating feature among smartphones, the Note9 inherited the rear dual-camera system - a 12-megapixel f/1.5 wide-angle and a 12-megapixel f/2.4 telephoto camera - of its S9+ cousin, complete with an 8-megapixel front-facing camera.

As is expected for flagship phones, this Android 8.1 smartphone is armed with the latest processors - the Note9 will come fitted either with Samsung's own Exynos 9810 chip or Qualcomm's Snapdragon 845 depending on the market.

The phone is expected to be for sale in Singapore soon although no details on the local pricing and launch date were announced at press time.