BARCELONA (AFP) - Finnish brand Nokia, a former mobile star, on Sunday (Feb 26) launched three new Android smartphones and unveiled a revamped version of its iconic 3310 model more than a decade after it was phased out.

Unlike the original, which was known for its sturdiness, the new Nokia 3310 will allow Web browsing.

But consumers in Singapore hoping to make calls or surf the Internet on the revamped edition of 2000's venerable Nokia 3310 phone are set for disappointment.

In December, Singapore's Infocomm Media Development Authority said that retailers and equipment suppliers will no longer be allowed to sell 2G-only mobile devices for use in the country from January. This ties in with the ending of 2G mobile services in Singapore from April.

This means that phones like the 2.5G 3310 cannot be sold here to consumers and even if a person manages to get the handset from overseas, there are problems using it in Singapore.

Singapore telco StarHub told The Straits Times that "all 2G-only phones will not support calls, SMS and data services" after 2G services end.

Consumers thinking of using the 3310 to surf online on Wi-Fi networks in the absence of 2G will be out of luck, too - the handset does not have Wi-Fi support.

Still, the new version of the 3310 will bring back its predecessor's popular "Snake" game and distinctive ringtones, said Arto Nummela, the head of Finnish start-up HMD Global which will produce the phone under a licensing agreement with Nokia.

"The telephone will allow you to talk for 22 hours, 10 times more than the original," he said during a presentation in Barcelona on the eve of the start of the Mobile World Congress, the world's biggest mobile phone show. 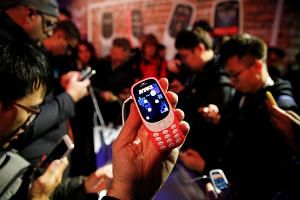 Nokia relaunches 3310: 'Snake' game and 6 other things about the old and new iconic phone 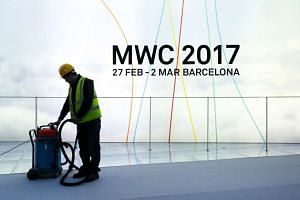 What to expect from Mobile World Congress 2017

Launched in 2000, Nokia's original 3310 sold nearly 120 million units worldwide before it was discontinued in 2005, making it one of the world's best-selling mobile phones.

"HMD launched three new smartphones and an iconic mobile. It is a way to create a halo effect around the other models by reviving talk about the Nokia brand," said Thomas Husson, a mobile analyst at Forrester.

In addition to the new 3310, HMD presented three new smartphones, the Nokia 3, Nokia 5 and Nokia 6 which will sell for different prices.

The Nokia 6 was already available in China and will now go on sale globally.

"We think (Nokia) could take 5 percent of the global smartphone market by the end of 2019. But it needs to get big quick or it won't work," said CCS Insight's device specialist and chief of research, Ben Wood.

Nokia was the world's top mobile maker between 1998 and 2011 but was overtaken by South Korean rival Samsung after failing to respond to the rapid rise of smartphones.

Last year HMD bought Microsoft Mobile's handset business and the right to use the Nokia brand.

Under the agreement, Nokia will receive royalty payments from HMD for sales of every Nokia branded mobile phone or tablet.