BERLIN - The Huawei P40 to be launched next year may be the Chinese firm's first smartphone to run its own HarmonyOS operating system instead of Google's Android, revealed Mr Richard Yu, the head of Huawei's consumer business.

In an interview with reporters from Europe and Asia-Pacific at Europe's premier consumer tech trade event - the IFA consumer tech trade show - on Friday (Sept 6), Mr Yu said that HarmonyOS is "ready for smartphones", but the company has not used the system because it is waiting for the United States government to reverse its ban on Huawei.

The ban prevents US firms such as Google from providing goods and services to the Chinese smartphone maker.

Mr Yu said that if the US ban persists, Huawei may have to consider using the HarmonyOS in its smartphones.

And the first such phone could be the P40 series next year, which will be the successor to this year's P30 models.

In response to a question from The Straits Times, Mr Yu also revealed that Huawei has been considering selling its Kirin processors to other companies in industries such as the Internet of Things (IoT) and robotics.

Huawei's Kirin chips are currently only used in its own products. Earlier on Friday at IFA, the firm launched the latest version, the Kirin 990 chipset with built-in 5G connectivity. 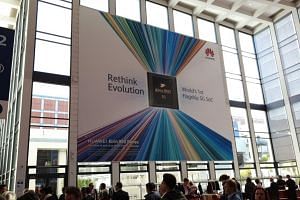 The Kirin 990 chip will be used in the upcoming Huawei Mate 30 smartphones, which will be launched in mid-September.

Mr Yu confirmed that the Mate 30 will not come with Google Play services and apps such as YouTube because of the US ban. But he added that the consumer is free to download them.

Mr Yu also suggested a similar approach for Huawei's computers, which cannot be preloaded with Microsoft's Windows operating system because of the US ban.

He said that the computers could run alternate operating systems such as Linux, and consumers can also purchase and download Microsoft's Windows operating system by themselves.