CUPERTINO - Apple has launched the iPhone X (or iPhone 10) to commemorate the 10th anniversary of the culture-changing smartphone during a special event held at the Steve Jobs Theatre in Apple Park - Apple’s new headquarters.

This premium model iPhone X features a Super Retina display that covers almost the entire front of the smartphone, which has been the trend for many of this year’s flagship smartphones like Samsung Galaxy Note8 and LG V30.

The Super Retina display uses OLED technology that is known to exhibit colours more accurately and vividly as well as being more power efficient.

Users just look at the phone to unlock the iPhone X. Apple said the phone will recognise users’ faces even in the dark, or changes in their hairstyles and facial hair.

In addition, the iPhone X features a rear dual-camera system that places the two cameras in a vertical orientation rather than the previous horizontal orientation. It uses a quad-LED flash system for more uniform lighting.

The iPhone X will feature the new A11 Bionic six-core processor that has two cores for intensive processing needs and four high-efficiency cores. In addition, the iPhone X supports wireless charging. 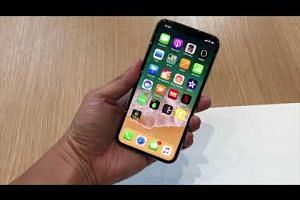 Straits Times gets 4 minutes with iPhone X. Here's the verdict

The iPhone X's price was a turn off for some consumers.

Assistant marketing manager Rebecca Koh, 26, said she does not think she will buy the iPhone X "as it is too costly, considering that there are not many new technologies or features" in the new phone. Miss Koh currently uses an Apple iPhone 7.

But analysts said the iPhone X's high price may not be a sore point for some buyers.

Said Mr Loo Wee Teck, Euromonitor International's  head of consumer electronics: "The iPhone X is a top of the range product and appeals to a different consumer segment. Its demand will not be deterred by the high prices.

"In most developed markets, including Singapore, smartphones are tied with a contract which helps to defray the upfront cost."

“We always think the price tag is high, but consumers buy," she said. "Remember, there are also new phones at lower price points. The hardware amortised over two years is about US$50 per month or one third of total cost of ownership for a consumer in the US.”

Some undeterred consumers include Mr Tang Weng Sing, a 45-year-old head of innovation at a software company. He intends to trade in his current iPhone 7 Plus for the new iPhone X, because the new model marks the 10th anniversary of the iPhone.

“I think the iPhone X will become as iconic as the first iPhone,” said Mr Tang.

Meanwhile, Apple has taken away the “S” moniker for so many of its previous “second-generation” models of the same design. Instead of calling them the iPhone 7s and iPhone 7s Plus, the direct successors will be known as the iPhone 8 and iPhone 8 Plus respectively.

Both models retain the design ethos of their respective predecessors but now come with a glass back. The iPhone 8 Plus continues to feature a rear dual-camera system, while the iPhone 8 has a single rear camera.

But both iPhone 8 models have been updated with the faster A11 Bionic processor and their 12-megapixel cameras are said to be faster in terms of focusing speed and be able to take better pictures. Both models also support wireless charging.