Called Gomo, an acronym for Get Out More Often, the plan offers 20GB of mobile data and 200 minutes local talk-time for $20 a month.

Customers sign up via the Gomo website and can get their SIM cards on the same day. A Gomo app handles all customer enquiries via a 24/7 live chat.

A Gomo travel SIM providing 3GB data over 10 days in countries like Australia, Malaysia and Thailand is also available at $20.

Gomo customers will also be able to enjoy exclusive dining offers such as 1-for-1 discounts at selected hipster restaurants and cafes.

"Gomo is for the segment of our customers who want to get things done easily and only want to interact with us digitally," said Mr Yuen Kuan Moon, Singtel Consumer Singapore's chief executive officer.

"We already have our SIM-only plans which address the needs of people who only want data but not so much the needs of those who want an all-digital or lifestyle experience." 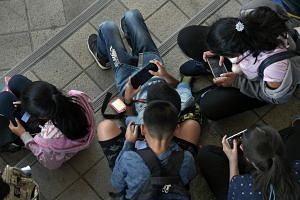 One in six consumers signs up for line-only mobile plans: IMDA survey

SIM-only plans come without a subsidised handset and at a lower price than conventional mobile plans. Singtel has five existing SIM-only plans of which one is contract-free. It offers 3GB of data for $20 a month.

Gomo's launch follows in the wake of rival telco StarHub streamlining its mobile plans from 10 to three last December. All three are SIM-only and contract-free, with the cheapest offering 13GB of data and 100min of talk-time for $25.

Virtual telcos like Circles.Life, MyRepublic, Zero1 and Zero Mobile offer similar no-frills plans to Gomo. For example, Circles.Life has a contract-free 20GB data plan with 100min talk-time for $28 a month.

Mr Yuen was coy when asked if the move means Singtel is going head-to-head with the virtual telcos here.

"We look at the (virtual telcos) as our wholesale customers. We don't own the company or the brand. How they position themselves in the market is entirely up to them," he said.

Current Singtel user Marcus Tan, 27, who works in the tech sector, said the Gomo plan is another option to think about but added: "It's not a new concept because Circles.Life has done it before.

"But I think the travel SIM deal is better than what other telcos are offering so I would be interested in that."

Singtel also announced that it will be offering one year free Amazon Prime membership to broadband and mobile customers who sign up for or re-contract their plans from March 26 to June 30.