The Apple Watch Series 6 (available on Lazada) looks like its predecessor, the Series 5, which also looks like the Series 4. You get the same rectangular watch case with a crown and a button on the right side.

While this might disappoint some, it does mean all the watch bands that current Apple Watch users have are compatible with the new smartwatch.

The Series 6 does come in new four new case colours - in blue and red aluminium as well as graphite and gold stainless steel.

We reviewed the graphite stainless steel model, which has a lighter shade of black compared with the space black stainless steel of previous models. This subtle change makes the watch look even more sleek and exquisite.

The Series 6's always-on display is 2½ times brighter than that of Series 5, according to Apple. It does look brighter to me and I find it much easier to read the time or notifications with this display under bright sunlight.

Inside, the Series 6 offers several upgrades, including the new S6 chip, with faster performance than the S5 chip in the Series 5.

The Series 6's always-on altimeter, a new feature, is able to measure elevation change in real time. It was fun watching the readings going up as I rode the lift to my flat.

But while it is mostly accurate, I do find fluctuations at times. For example, I found one reading to be 60m when I was home, but there were times it was 30m or 40m.

The Series 6 is now able to measure your oxygen saturation, also known as SpO2, with the new blood oxygen sensor and app. It will continue measuring even when you are asleep.

This is in addition to the same health and fitness features - such as heart-rate monitoring and electrocardiogram (ECG) screening - that are already found in Series 4 and 5. And with Apple's new watchOS 7, the Series 6 can track your sleep as well.

While the new OS is supported on as old a model as the Series 3, the faster S6 chip makes everything in the Series 6 more responsive and intuitive.

Other new features include a handwashing reminder.

The built-in sensors will automatically detect when you start washing your hands. A timer will appear, counting down from 20 seconds - the recommended duration of hand washing. A handy feature to have in this pandemic. 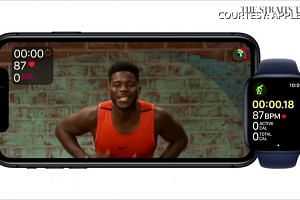 Apple announces new smartwatches that will come without power adapters

Plus, you can set reminders to wash your hands when you reach home by using geo-location with the built-in GPS.

But due to GPS triangulation limits, the reminder does not work if you are not far enough from your home. For instance, after getting lunch at a coffee shop a block away, the watch did not remind me to wash my hands. But it did after my grocery run at a supermarket further away.

The watchOS 7 offers several new options for watch faces, such as Chronograph Pro and Typograph. But my favourite is the GMT face, where the digital bezel is in Pepsi blue and red - the same colours found on my dream timepiece, the Rolex GMT Master II.

With the GMT face, you can select the second world time by rotating the crown to find the city you want. And the second hour hand will point to the bezel to show the selected world time. Great for video-conferencing meetings with people in other countries. And for travelling in the post-pandemic future.

In terms of fitness tracking, the Series 6 is as good as it gets. For step tracking, the readings were very close to those of my personal calibrated Series 4 - with a mere difference of 50 steps. On my usual 5km jogging route, the GPS-tracked runs by Series 6 were only around 10m to 20m off.

However, the sleep tracking can be better. It does not automatically track your sleep like what Fitbit and Garmin fitness trackers and smartwatches do. You have to set the time you go to sleep and wake , or manually turn the sleep mode on and off.

Plus, it shows only your sleeping hours. There is no breakdown of light and deep sleep, which is not very insightful.

Battery life is slightly better than the Series 5's. When I had the watch paired to an iPhone with notifications turned on and a 5km run recorded, the power was at around 50 per cent by bedtime, compared with the 40 per cent in the Series 5.

But the Series 6 offers faster charging, juicing up from zero to 80 per cent in an hour. I also found that only 6 per cent of its battery life was depleted after a six-hour sleep.

For those using the Series 5, the Series 6 is not much of an upgrade. But for users of the older models, like myself, it is probably time to upgrade to the Series 6.

However, if the price, which starts from $599, is a concern, Apple has also introduced the more wallet-friendly Apple Watch SE, which is priced from $419.

But it lacks the SpO2 and ECG features of the Series 6, so if you just need basic smartwatch and fitness functions, the SE should do the job.

• Same design as its predecessors