NEW YORK - Microsoft unveiled its new Surface Book hybrid laptop at an event in New York on Tuesday, marking the first time that the software company is launching a full-fledged laptop.

Touted as the “ultimate laptop” by Microsoft Surface head Panos Panay, the 13.5-inch Windows 10 machine is the newest addition to Microsoft’s Surface family of hybrid devices.

By pulling its screen apart from its keyboard base, this 2-in-1 machine transforms from a full-powered laptop into a giant tablet. Previous Surface hardware were available with optional keyboard accessories.

Microsoft claims that the Surface Book is up to 50 per cent faster than the Apple MacBook Pro, thanks to its Nvidia graphics chip. It is touted to offer 12 hours of battery life, and runs on the latest Intel Core i5 and i7 Skylake processors. 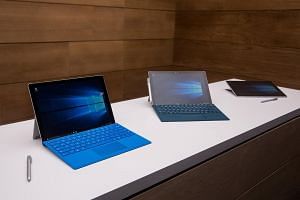 How the Microsoft Surface Pro 4 stacks up against its rivals

The company has not revealed pricing and availability for Singapore.

While the Surface Book targets those who want a larger screen, the company has not forgotten those who want a new Surface Pro tablet, which Microsoft has grown to become a US$3.5 billion business in just a few years.

The company announced a new 12.3-inch Surface Pro 4 that is thinner than the previous model, but which comes with more memory and storage.

It also comes with a new pen stylus that uses magnets to attach itself to the tablet.

The Surface Pro 4 tablet, which is available with Intel’s Core m, i5 and i7 Skylake processors, will be available for online pre-orders from the Singapore Microsoft Store from Oct 7.

Two new Lumia smartphones were also announced at the launch event, though details on both phones were leaked earlier in the week.

The devices can be unlocked with a new facial recognition feature called Windows Hello, but the best feature they offer is that each device can approximate a Windows PC-like desktop experience, simply by connecting the phone to a monitor, keyboard and mouse using the Microsoft Display Dock.

The cameras on both devices come with a 20-megapixel sensor and advanced optical image stabilisation.

The phones also offer 32GB of internal storage, which can be expanded to 200GB using a microSD card.

A third entry-level model, the 5-inch Lumia 550 will be available in December for US$150.

There is no pricing or availability information for the three phones for Singapore.

To wrap things up, Microsoft also announced an updated Microsoft Band fitness tracker, which comes with new features, such as a built-in barometer.

The company’s augmented reality HoloLens headset also got some airtime with a game demo. Microsoft said that it will be accepting applications from developers for an early version of its HoloLens headset.

Local pricing and launch details for both of these devices were not announced.