SINGAPORE - Google is chipping in to train the next-generation of technology innovators here.

Next year, it will roll out a Code in the Community programme, with the goal of training some 3,000 children from needy homes over the next three years.

The programme hopes to heavily subsidise the cost of coding lessons to bridge the digital divide.

Mr Caesar Sengupta, vice-president of Google's The Next Billion Users division, said that the broader goal is to get young Singaporeans excited about technology and engineering.

"Google can play a part to inspire students to take up technology as a career. We need more engineers and product designers coming out of local schools," he said in an interview.

This is in line with Prime Minister Lee Hsien Loong's pitch earlier this year for more students to consider a career in engineering and technology to keep public infrastructure projects going. 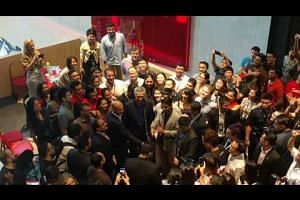 The value of Google's sponsorship was not disclosed.

But the cost of training 3,000 children is estimated to be at least $1 million going by the existing rates for coding lessons. For instance, classes at coding school Saturday Kids start at $350 for an introductory 10-hour course in Scratch, a programming language.

Google will work with self-help groups such as the Chinese Development Assistance Council (CDAC), Mendaki, Sinda and the Eurasian Association to identify needy homes.

Code in the Community will target children, aged eight to 15, from such households. The 10-week course - to be conducted by 21C Girls and Saturday Kids once a week on a weekend - will take place twice a year. More details will be announced at a later date.

Coding school Saturday Kids also has its own tie-ups with community centres and the CDAC to conduct subsidised classes targeted at low-income families in their districts.