SINGAPORE - Google on Thursday (Nov 10) officially opened the doors to its new office at Mapletree Business City II in Pasir Panjang, where it occupies two entire office blocks to house its "fast growing" team of engineers.

The tech giant hopes to attract more Singapore engineers working overseas, especially in Silicon Valley tech firms, to return home. It now has 1,000 employees, including an undisclosed number of engineers, in its new Singapore engineering hub.

"We are starting to see a lot of Singaporeans coming back," Mr Caesar Sengupta, Google's locally-based vice-president of The Next Billion Users, told The Straits Times in an interview.

Mr Sengupta, who became a Singaporean 10 years ago, said the nation is a good place for "long-term bets" due to its business-friendly policies. 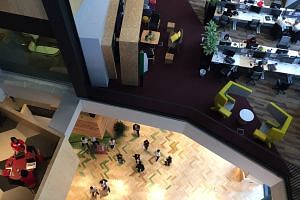 Google to sponsor coding lessons for 3,000 children in needy homes

He would not disclose new hiring plans, but said that the engineering team here is "growing very fast".

"The tech industry here is very vibrant now with a lot of start-ups, and it is a very good place to source for talent."

Basing an engineering pool here is also strategic for the company, and for Mr Sengupta, as it wants to be close to Internet users in South-east Asia.

His division works on products to bring Internet content to more people. These include translating content into Asian languages, and enabling Google Maps and YouTube for offline use for places where mobile access is limited or expensive. Virtual reality (VR) and augmented reality (AR) projects will also be done in Singapore.

Prime Minister Lee Hsien Loong, who was at the opening along with Minister for Trade and Industry (Industry) S. Iswaran, hopes Google and Singapore can benefit from each other - especially in a world where technology is rapidly changing the way business is done.

Highlighting the country’s Smart Nation initiative, and its energy and buzz, he said “we will be able to add something to Google”.

“Tech is disruptive and your objective is to disrupt the world,” he added. “We expect to be disrupted but we want to... come out on the right side of disruption.”

Turning to a crowd of more than 100 Google employees, Mr Lee said: “And we depend on you to help us to do better.”

Google's local engineering hub is the latest addition to a growing list of similar facilities in Hyderabad in India, Sydney in Australia, and Mountain View in the United States, among other locations.

Google's Singapore office, which is its Asia-Pacific business headquarters, started with only 24 people in 2007 and has primarily been focusing on business development, sales and marketing.

Checks by The Straits Times show that the two office blocks the firm has leased at Mapletree Business City II could accommodate up to 3,000 people depending on office configuration.

Dr Beh Swan Gin, chairman of Singapore's Economic Development Board, said the setting up of Google's engineering team here is a reflection of its confidence in Singapore's tech capabilities.

"In particular, we welcome Google's close collaboration with the Singapore Government to train Singaporeans in digital skills and partner small- and medium-sized enterprises in adopting digital solutions," he said.

Dr Beh added that Google's vision to reach the next billion users is in line with Singapore's plans to become a smart nation and digital capital of Asia.

Speaking at Google's official office opening, Mr Iswaran said that it is important for Singapore to establish leadership positions in digital segments, such as software, devices and infrastructure.

The digital economy is expected to contribute US$2 trillion in additional output globally by 2020, and Singapore wants a cut of this.

"One important reason for our focus on the digital economy, and the partnership with leading companies like Google, is the new opportunities it will create for local SMEs and Singaporeans," said Mr Iswaran.

In particular, SMEs can enter online and global markets without requiring a huge investment. There will also be new jobs for Singaporeans, he added.

Based on a survey conducted in June 2015 by the Info-communications Media Development Authority of Singapore (IMDA), it is estimated that 53,000 new jobs in areas such as data analytics, software engineering, cybersecurity and digital marketing will be created by 2018.