SINGAPORE - Fans of Pokemon Go have fanned out across Singapore in search of the critters and to conquer "gyms" - real-life locations where players can hold and defend against other players - after Saturday's (Aug 6) launch.

The Republic's small size and urban environment mean that gyms and Pokestops - locations where players can get virtual items - are never far away. Here are some that you should be aware of:

The dragon playgrounds in Toa Payoh are some of Singapore's most beloved. The one at Block 240, Toa Payoh Lorong 1 is not the oldest, but it is estimated to have been around since 1985 and is a nice example of the style.

It is now also the home of a gym that has changed hands constantly since the game launched on Saturday morning. So it may be more than just children who are crowding around the playground.

The swanky mall in town is not a gym, but is home to several Pokestops. More importantly, it could be the best place to catch Pokemon the next time you're in the area.

The mall's management is releasing lures until Aug 21, which attract more Pokemon to the vicinity. Players have already been spotted hanging around outside, glued to their smartphones.

Some areas seem to have high concentrations of Pokestops and gyms. Chinese Garden, a short walk from the MRT station bearing the same name, seems to be one of them.

The garden and its neighbouring Japanese Garden are home to no less than three gyms and at least 20 Pokestops, going by online reports. And if you can't catch the Pokemon you want, at least you'd have taken a nice walk through some greenery.

You'll need to hop on a ferry if you want to claim the gyms on Pulau Ubin, off Singapore's north-east coast.

The island is home to a number of Pokestops and gyms, but you'll have to traverse almost the entire place if you want to hit them all on Ubin.

You'll likely visit one of these today, so why not catch some Pokemon while you're at it. It seems like most MRT stations are either Pokestops or gyms.

Unfortunately, stops on the Downtown Line seem to have been neglected, so factor that in if you're planning a tour.

Whether it's the Singapore Zoo, Sentosa, Marina Bay Sands or Gardens by the Bay, developer Niantic has aspiring Pokemon trainers well covered.

They are all home to plenty of Pokestops and gyms, but expect crowds as both tourists and Pokemon Go fans throng these areas. 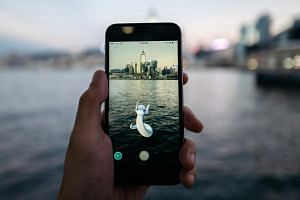 Seriously, there's no need to go on a far-flung excursion in search of Pokestops and gyms. Chances are that there are a decent number on the streets that you are familiar with, tagged to statues, signs and landmarks that you walk by every day.

A glance at Pasir Ris shows playgrounds, park connectors, community buildings, murals and even floor designs being used as gyms. So why not take a walk and see your neighbourhood in a new light?