SINGAPORE - Coming up against regional opposition they are likely to face again at the SEA Games at the end of the year, Evos Esports SG gave an early indication of their medal potential when they finished as runners-up at the South-east Asia Clash of Champions tournament at Suntec City on Sunday (May 19).

Evos, Singapore's SEA Games representatives for the Mobile Legends game, had not been expected to prevail against opponents who were both more experienced and had more preparation time coming into the tournament.

But the five-man team came from behind to upset Philippine national champions Cignal Ultra in the semi-finals before pushing prohibitive favourites and eventual champions PSG RRQ of Indonesia to a deciding game in the best-of-three grand final.

PSG RRQ, who had not lost in seven previous games over the weekend, eventually proved too tough a nut to crack however, taking the tie 2-1 to claim the winner's cheque of US$5,000 (S$6,897).

More than 2,000 people attended the tournament, which is the first regional Mobile Legends event Singapore has hosted.

Despite the loss, Evos captain Robert "OhDeerBambi" Boon was in an upbeat mood.

"PSG RRQ has been dominant throughout the tournament so we're very proud to take a game off them and also show that we're the second-best team in the region. We didn't have much time to prepare after the local qualifiers (on May 5), but we will be much better moving forward," said the 21-year-old pharmaceutical science undergraduate, who is the team's youngest member. 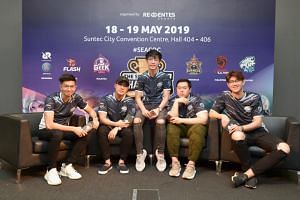 eSports: The sky's the limit for eSports with soaring global revenue and fan base

He added that the difference between his team and PSG RRQ came down to mental strength and communication, something that Evos intend to work on with more competitions to come in the next few months.

Their next competition will be in June in the Philippines. Evos won the local qualifier earlier this month and will be nominated to the Singapore National Olympic Council by the Singapore Esports Association.

Mobile Legends is one of five e-sports medal events at the Nov 30-Dec 11 SEA Games in the Philippines where e-sports is making its debut. The other four games are Dota 2, Starcraft II, Arena of Valor and Tekken 7.

PSG RRQ's Muhammad "Lemon" Ikhsan, 20, said his team was glad to come out on top in a tight contest.

"We are happy to have beaten Evos as they're the top team in Singapore. But I think we can be a lot better than this and there is a lot for us to improve on," he said.

Mobile Legends belongs to the multiplayer online battle arena (Moba) genre. In such games, players typically form teams of five, with each player controlling one character on the game map.

A player's character, usually known as a "hero" unit, gets stronger by gaining experience points and in-game gold from defeating enemy units and heroes.

Gold is used to buy items which further upgrade a hero's capabilities. The game is won by destroying the opponent's headquarters.