SINGAPORE - Crowds thronged the Suntec Convention and Exhibition Centre over the weekend to hunt for the best deals on electronic goods and tech gadgets.

Visitors to the IT Show 2018 were able to cherry-pick from a wide range of the latest televisions, notebook computers, smartphones and cameras, with exhibitors throwing in freebies and discounts to reel in buyers.

The annual fair, now in its 17th year, kicked off on Thursday (March 15) and will end on Sunday at 9pm. The free-admission show is organised by Exhibits Inc, a subsidiary of Singapore Press Holdings.

Ms June Ng, head of business for the IT sector at Exhibits Inc, said: "We had a 20 per cent increase in total footfall compared to last year.

Among the deals at the IT Show were those for mesh routers – devices that can help users eliminate Wi-Fi blindspots. For example, a pack of three Google Wifi routers cost $15 per month over a 24-month period - or $360 - when customers sign up for or renew selected StarHub broadband plans. The usual price is $597.

At the event, visitors were also able to trade in their old gadgets - including video game consoles,TVs and cameras - for cash vouchers, which could be used to buy new products.

Many like Madam Sarimah Sainin, 49, were repeat visitors to the annual fair. This year, Madam Sarimah, a teacher, bought a 55-inch TV for her family. The item had been discounted from $1,999 to $779. 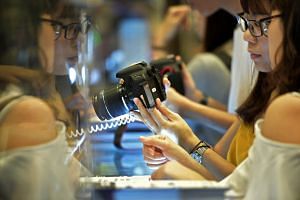 "The television at home has not been working for the past three months, so I took this opportunity to get a new one," she added.

Operations analyst Alan Chow, 32, spent about two hours on Saturday on the lookout for the best deals on a laptop computer, and eventually returned to the fair on Sunday to buy one.

Mr Chow added: "The laptop is $100 cheaper. On the last day, the exhibitors will want to clear off their stock, hence I only decided to buy it today."