SINGAPORE - All upper primary pupils will have coding classes from next year, as part of the Government's goal to develop a healthy pipeline of tech talent for the digital economy.

Conducted by the Education Ministry and Infocomm Media Development Authority (IMDA), the 10-hour enrichment programme will be piloted this year at some schools for pupils after their Primary School Leaving Examination (PSLE), before being rolled out to all primary schools by 2020.

Code For Fun (CFF) will seek to develop an appreciation of core computational thinking and coding concepts in pupils, through simple visual programming-based lessons.

This was one of several key announcements made by Minister for Communications and Information S. Iswaran at the ministry's workplan seminar, which centred around building a safe and inclusive digital society for Singapore that leaves no one behind.

At the seminar on Wednesday (July 10) at the Suntec Singapore Convention and Exhibition Centre, the minister also announced the formation of a new specialised telecoms cyber security specialist team, and more efforts to equip Singapore's ageing population with basic digital skills. He also gave an update on government initiatives to help companies digitalise their business.

This, he said later, starts from young, and CFF will seek to excite young Singaporeans about the opportunities in the digital age and expose them to the skill sets needed for the potentially lucrative digital economy. 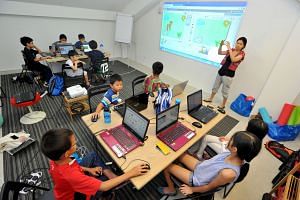 In 2016, a study by Oxford Economics and Huawei estimated that the size of the global digital economy amounted to about US$11.5 trillion (S$15.6 trillion) or over 15 per cent of global gross domestic product.

And closer to home, a study published by Microsoft last year estimated that the digital economy would contribute another US$10 billion to Singapore's GDP by 2021 to increase the growth rate by 0.6 per cent annually.

The Ministry of Communications and Information said in a fact sheet on Wednesday that since CFF was launched as an optional enrichment programme in 2014, it has benefited 93,000 students.

It added that the programme will continue at the secondary level as an option to complement existing efforts in computing education, which include computing subjects taken at O Level (elective) and A Level.

Mr Iswaran also announced that the Cyber Security Agency (CSA) will be expanding its youth engagement outreach with the Singapore Cyber Youth Programme (SG Cyber Youth), a collaboration with the cyber security industry and academia.

This programme will reach out to 10,000 secondary and tertiary students in the next three years to provide them with opportunities to explore cyber security as a career and expose them to relevant technical knowledge and soft skills.

It will build on CSA's existing efforts, which include the Youth Cyber Exploration Programme (YCEP) boot camp, a multi-day initiative which aims to introduce secondary school students to the opportunities of a cyber-security career and was started in collaboration with Singapore Polytechnic last year.

Are coding classes beneficial for pre-schoolers?

All five polytechnics are now involved in the boot camp, and this year's edition attracted a turnout of 400 students from over 30 secondary schools coming together to learn about cyber security.

Among other new initiatives under the new SG Cyber Youth will be a new advanced-level of the YCEP to be introduced next year, said the MCI.

The ministry added that students can also look forward to participating in cyber security learning journeys CSA holds with the Education Ministry and its industry partners, adding that more initiatives will be announced next year.