The B&O BeoPlay E8 2.0 is packed with premium features. For starters, there is its leather wireless charging case with a sleek brushed aluminium inlay inside. Each earbud is also beautifully crafted with a touch-sensitive pad.

The B&O app makes pairing a breeze. Bring the earbuds close to the smartphone, and the app will automatically recognise the earbuds for pairing.

Tap once on the right earbud to play or pause tracks and tap twice to skip tracks. Tap the left earbud once to activate the ambient noise mode, so that you can hear your surroundings.

Audio quality is superb, second only to that of the Sony WF-1000MX3 in this roundup, with really punchy bass and crisp mids and highs. But when you crank up the volume, the mids get slightly distorted with the highs losing details.

My other quibble is the lack of active noise cancellation (ANC), a feature one would expect given its $550 price tag.

Battery life is not bad at around four hours. The charging case adds 16 more hours.

The Sony WF-1000XM3 comes with active noise cancelling (ANC), a feature that is rare in this genre.

While the ANC in in-ear headphones might not be as effective as that with over-ear headphones such as the Bose QuietComfort 35, which further blocks out noise by covering the ears, the WF-1000XM3's ANC is good enough given its small form factor. It was able to filter out most of the ambient noise in my office, apart from that of colleagues who are were talking near me.

Each earbud has a direct Bluetooth connection to your mobile device, which means both the left and right earbuds receive audio content simultaneously. This is unlike most TWH that use one earbud for smartphone connectivity.

The successor to the iconic AirPods did not see much change in design. But you have the option to get a wireless charging case with it.

Also new is its H1 chip that allows faster connection and hands-free Siri activation. Just say "Hey, Siri" before asking it to do what you want, like turn up the volume.

Pairing, especially with an iPhone, is a cinch. Bring the charging case with the AirPods 2 in it close to your iPhone, flick open the cover and a window showing the AirPods will pop up on your phone. Tap on the window's Connect option and it is done.

Audio quality is pretty good, with a decent bass oomph that is similar to the original. The highs and mids might not impress audiophiles, but should satisfy most.

Battery life is around five hours. The charging case adds another 24 hours.

Launched early this year alongside the Samsung's S10 flagship smartphones, which ironically are the last flagships by the company to have a headphone jack, the Galaxy Buds is Samsung's answer to the Apple AirPods.

The earbuds have a minimalist design with a triangular touchpad on their exterior. They come with a pillbox-shaped wireless charging case.

Pairing is easier with Android smartphones - especially Samsung's Galaxy devices - than with iPhones. You do need the Android-only Galaxy Wearable app to get the quick-pairing function similar to the one for the AirPods and iPhone, which simplifies the process of connecting headphones to smartphone.

Sound quality is decent. Switch the app's equaliser to the Dynamic mode for a good balance of bass, mids and highs.

Available in six colours - white, blue, green, pink, yellow and black - and looking sleek with the slim oval earbuds, these headphones show that you do not need to pay a lot to get a decent pair of TWH.

Armed with 5.8mm dynamic drivers, its audio quality is decent, with clear mids and distinct highs though the bass lacks punch.

Two downers are the lack of a companion app to adjust equaliser settings and the confusing controls. To the latter point, pressing the left earbud's button once will skip a track, while doing the same with the right earbud's button will play or pause a track. The problem is one tends to forget which function is associated with each earbud.

All things considered, the JBL Tune 120TWS offers great value for those who want a pair of simple-to-use TWH.

Despite being the cheapest TWH here, the Creative Outlier Gold is packed with features, such as Creative's proprietary Super X-Fi (Sxfi) 3D sound, Bluetooth 5.0 and IPX5 water resistance rating (sweat-proof).

It comes with a gold-coloured aluminium charging case (wireless charging not supported) and each earbud has a black button surrounded by a LED ring. Pretty cool-looking.

Fit is snug and good for jogs, but might not be tight enough for vigorous training.

Audio quality is superb for its price with punchy bass and crisp highs. The only downer is the mids tend to get drowned out.

The Sxfi app creates a software-simulated soundstage that makes music sounds like it is coming from different directions. It works but this holographic effect is present only when the song is played in the Sxfi app.

Battery life is an amazing 14 hours. The charging case adds another 25 hours.

Easily the best value TWH in our roundup.

Beats is owned by Apple. No surprise then that its latest Powerbeats Pro features the same H1 chip found in the AirPods 2, which gives it the same quick-pairing function and hands-free Siri operation of the latter.

However, unlike the AirPods, its earbuds each has an adjustable earhook that allows them to stay snug in the ear during jogs and workouts. And the hooks do work - no matter how hard I tried to shake the earbuds off my ears, they stayed on.

Audio quality wise, the Powerbeats Pro takes the middle ground, whether it is with the high, mid or bass frequencies. But while the sound can seem flat and unexciting, I found it pretty satisfying overall.

One downer is its low water resistance rating of IPX4, good only for protecting against perspiration and water splashes. This makes it more ideal for gym workouts than outdoor runs.

Battery life is rated at nine hours, with the charging case adding another 15 hours.

The Vista is Jaybird's lightest TWH, according to its maker. Each earbud weighs a mere 6g and comes with an eargel - a removable silicone exterior that consists of a eartip and a earhook.

Out of the box, the earbuds are fitted with size 2 eargels which fit my ears snugly during jogs. Included are two more pairs of eargels of different sizes.

Each earbud has a multi-functional button, marked by the Jaybird logo. Controls are simple. Just tap once to play or pause, and double press for the next song. The Jaybird app lets you choose or customise the equaliser settings. 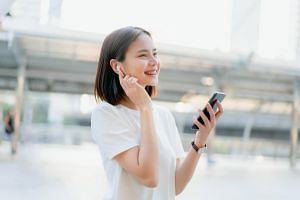 Audio quality is great, with good clarity in the mids and highs, though I felt the bass to be a bit lacking. It doesn't go as loud as the other TWH here at maximum volume, which might be an issue with some people.

What everyone will like though its IPX7 water resistance rating, meaning it is good enough for jogs in the rain.

Battery life is six hours with its charging case adding another 10 hours.