NEW YORK - Apple has unveiled its new iPad Pro tablets, which have ditched two mainstays of the company's previous slates - the Home button and the Lightning port.

The iPhone maker announced at a special event held at the Howard Gilman Opera House in New York City on Tuesday (Oct 30) that the new iPad Pros use Face ID, Apple's face detection technology, for biometric authentication instead of the Home button or Touch ID.

The iPad Pros are the last Apple mobile gadgets to remove the Home button.

With this move, the new iPad Pros have a all-screen fronts with very thin bezels. Yet, the tablets do not have the "notch", which houses the TrueDepth camera needed for Face ID, found in iPhone XS.

The new iPad Pros are just 5.9mm thin - 15 per cent thinner and 25 per cent smaller in volume than their predecessors. Without the Home button, the smaller version of the new iPad Pro comes with a 11-inch display while the larger 12.9-inch version is now "dramatically smaller".

Perhaps the bigger news is how Apple has ditched its proprietary Lightning port in favour of the USB-C port - used in many non-Apple devices - for the new iPad Pro. With USB-C, it allows for connectivity to 5K monitors without the need of an adaptor. It can be even used to charge other devices, like the iPhone.

The Apple Pencil 2, which can be used with the iPad Pro, has been streamlined, with the metal ring on its top gone. It can be connected magnetically to the side for storage as well as pairing and wireless charging. Furthermore, a double tap on the stylus allows for a quick change of the tools on the iPad Pro. 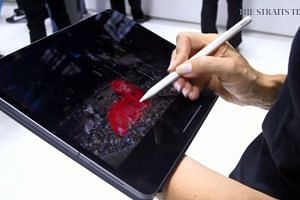 The updated iPad Pros come with the new A12X Bionic chip for up to 90 per cent faster processing speeds and twice the graphics performance than its predecessors. It also features up to 1TB of internal flash storage, an increase from 512GB previously.