SAN JOSE -  It's time to say goodbye after 18 years. On Monday (June 3) at its annual Worldwide Developers Conference, Apple said it will be discontinuing iTunes, which revolutionised the way people buy music.

Delivering the keynote address, Apple’s software chief Craig Federighi first shocked attendees by saying how everyone loved iTunes and that Apple would be adding more features to add to the bloat. Then he added: "The future of Apple Music iTunes is not one app but three."

However, times have changed with consumers preferring to stream music onto their devices these days.

The advantage of streaming: the ability to access a vast catalogue of music without having to make individual purchases, said Mr Bryan Ma, market research firm IDC's vice-president of client devices research.

"Users also don't have to physically move the music from one device to the next," Mr Ma said. "With more network coverage and more bandwidth available to users today, streaming has been made much more dependable and affordable to become commonplace."

According to the Recording Industry Association of America's 2018 report, streaming represented 75 per cent of the US music industry's revenue that year. By comparison, digital downloads of music only contributed 11 per cent.

Mr Loo Wee Teck, head of consumer electronics at market research firm Euromonitor, said iTunes was "a necessary evil" when it was introduced. It was designed for the iPod but "continued its unwelcome stay on Apple devices and computers for 18 years".

The new Apple Music app will keep some of iTunes' key features, such as music purchases and syncing of iOS devices. The Straits Times understands that users will be able to keep their content libraries in the respective apps - Apple Music, Apple TV and Apple Podcasts - following the discontinuation of iTunes.

Marketing executive Chow XY, 26, said she does not use iTunes except to back up her phone. But now she wonders if she would need to turn to other options with the discontinuation of iTunes. 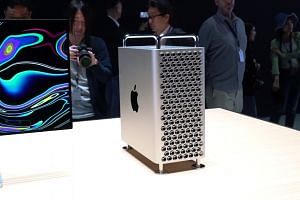 What to expect at Apple's WWDC 2019: Dark Mode in iOS, app porting for Macs and new Mac Pro

"I just hope that data syncing would not be an additional hassle," she said, noting that she has resisted backing up on the cloud to avoid incurring the ongoing costs of cloud-based storage.

Apple also said that the latest version of its mobile operating system, the iOS 13, will restrict how iPhone apps collect users' data. For instance, the new operating system will block apps from using Wi-Fi and Bluetooth connections to figure out a user’s location. And apps need to ask for permission each time they want to access users' location again.

The new privacy features come amid greater scrutiny of the way big tech firms including Google and Facebook share and allow third-parties such as app makers use consumers' personal data to better target them with ads, among other reasons.

Apple also introduced a new way for users to sign into third-party apps and services using an Apple ID for greater protection. "(Facebook or Google) log-ins can be used to track you, so we wanted to solve this" said Apple's Mr Federighi.

However, the iOS 13 will no longer support older handsets such as the iPhone 5S, iPhone 6 and 6 Plus, which were launched about six years ago.

One of the highlights of the keynote address is the announcement of iPadOS for iPads, which will be separate from the iOS for iPhones.

The new features of iPadOS include multi-windows capability for better multi-tasking, Column view for file previews and quick actions as well as USB thumb drive and SD Card support via the Files app.

The new watchOS 6, for Apple Watch, will have its own App Store, so users can directly download apps without using the companion app on their iPhones. In addition, the new watchOS supports more watch faces as well as adding hourly haptic chime. For women, there will be period tracking support.

There are also more native Apple apps on watchOS with Audiobooks for users to listen to audio books, Voice Memo to record lectures and Calculator to do calculations quickly.