SINGAPORE - Singapore will now stop analogue broadcasting from Jan 1, 2019 - a one-year extension of the original timeline.

The announcement, made in Parliament on Monday (Nov 6), came in a written reply to Tanjong Pagar GRC MP Melvin Yong's question on how ready low-income households here are for digital TV broadcasting.

In his reply, Minister for Communications and Information Yaacob Ibrahim said: "It is important that Singaporeans can continue to access Mediacorp's free-to-air channels after analogue broadcasting is phased out."

This is because free-to-air channels carry programmes that promote societal values and the Singaporean identity, he added.

The move to digital broadcasting started in December 2013 when national broadcaster Mediacorp converted all seven of its free-to-air TV channels to the digital format. It has continued to broadcast in the analogue format, but this will stop from 2019.

Although about three in four of some 1.2 million Singapore households are already receiving Mediacorp's digital TV signals over the air or through their pay TV set-top boxes, there are still 75,000 low-income households that have yet to make the switch to digital broadcasting, said Dr Yaacob.

These are people living in one- or two-room rental flats, or those on ComCare or self-help groups' help schemes. They have a monthly income of $1,900 and below, or an annual property value of $13,000 or lower. 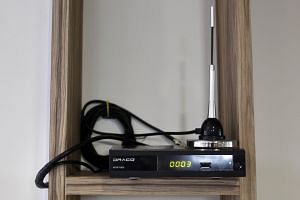 What is digital broadcasting and how do you know if you can receive it?

Under the Infocomm Media Development Authority's (IMDA) help scheme rolled out in 2014, the needy households are entitled to free equipment.

IMDA has sent out notification letters to over 139,000 households but only about half have claimed and installed their free set-top boxes and indoor antenna, said Dr Yaacob in his written parliamentary reply.

IMDA will be intensifying outreach efforts by knocking on doors and working with the grassroots, but this is "not sufficient", he said.

As such, the Government decided to extend the deadline. It will also beef up assistance for needy households and will announce the new measures early next year.

The deadline extension will also better align Singapore's analogue switch-off date with that of its neighbours Malaysia and Indonesia, expected to be around the beginning of 2019.