But there is no need for those who do not own one of the 1,400 flats there to feel left out.

Ampotech, a spin-off from the Agency for Science, Technology and Research (A*Star), has developed a smart power-monitoring device compatible with existing homes that can track how much energy each household appliance consumes.

This means, for example, that home owners can zero in on appliances left switched on for too long, potentially reducing their electricity bills.

Ampotech is conducting home trials and plans to make the device, called the AmpoHub, available for homes here by early next year.

All users have to do is plug the small wireless device into a spare circuit breaker in the electrical distribution board - or switchboard - that every household has, with the help of a trained electrician.

The AmpoHub, in fact, goes one step further than the smart switchboards in Punggol Northshore, which monitor individual circuit breakers with built-in sensors.

The AmpoHub has the brains to identify household appliances based on their electrical wave patterns and then track their real-time energy consumption.

This data is then transmitted via Wi-Fi to Ampotech's Web-based platform for users to view.

This Web platform is used by Ampotech's business customers currently, but the company is working to build a mobile app for home users, said Ampotech's chief executive officer and co-founder William Temple.

"We are also working to add new features like alerts when there is a risk of a power shortage, or when a device has been left on for too long," he added. 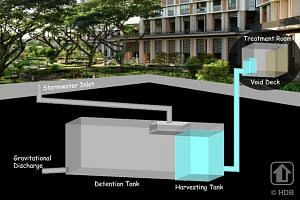 The AmpoHub works differently from regular smart electricity meters, which typically provide only an hourly energy consumption reading in kilowatts.

It is also distinct from smart plugs, which have to be plugged into individual power sockets and can track only the energy usage for that socket, meaning users may end up having to buy 10 or more smart plugs to cover their entire home.

Mr Temple said the AmpoHub will cost no more than $300, although there is still installation costs to account for.

The AmpoHub has already been used by 10 small retailers, including convenience stores, bakeries and petrol stations, to monitor their energy consumption.

Ampotech has not yet filed a patent for its device. Mr Temple said the company intends to work with a partner to bring the AmpoHub to consumers, but did not elaborate on likely candidates.

Ampotech was founded in late 2014 as a spin-off from the Advanced Digital Sciences Center, a University of Illinois affiliated research centre supported by A*Star.

At least one will be a "smart electrician", someone who has knowledge of both electrical wiring and network management needed for the installation of the AmpoHub.

"All these worlds are crashing together today, construction and electrical engineering with IT," said Mr Temple, who was trained as a mechanical engineer.

"Not many companies understand both, but we are trying to fill that void."