SINGAPORE - The air taxis from German aviation start-up Volocopter soon taking to the skies here will have "unprecedented levels of safety", said its chief executive Florian Reuter, with the company aiming to begin Singapore test flights in the third quarter of the year.

Mr Reuter gave his assurance on Tuesday (April 9) that should any of their critical components fail, the Volocopter machines would still be able to "complete their mission" and arrive at their destination, owing to a design that has multiple components that run independently.

"In order to be operating these vehicles in cities around the world, we need to be as safe as commercial airlines. That is the safety level that has been set for this vehicle," he said at the Rotorcraft Asia (RCA) 2019 and Unmanned Systems Asia (UMSA) 2019 exhibition held at the Changi Exhibition Centre.

Last October, The Straits Times reported that Volocopter will be performing a series of urban flight tests of its air taxis in the Republic from June this year.

Mr Reuter gave an update to this timeline, and said that Volocopter will be conducting private flight tests here in the third quarter of this year, which will be followed by public flight trials. He also said that while many recognise Volocopter's machines for their unmanned potential, these air taxis will initially take flight with a pilot, as this would make it easier for the company to get government approval.

"Of course, everybody talks about autonomous mobility and yes, the Volocopter can also be operated autonomously in the long run. However, we believe we would make it much easier for certification agencies from across the world if we start out with a certified pilot. So expect Volocopter services to have a certified fully-licensed pilot by your side initially" before the firm "takes the pilot out", he said.

Mr Reuters also showed several possible future routes that air taxis in Singapore could take. One is a 26km flight from Tuas to the Central Business District, while another is an 18km route from Changi to Sentosa. He also showed potential international routes such as a 26km route from central Singapore to Johor, and a 22km trip from Sentosa to Batam.

Although not many details were revealed about the cost of these rides, Mr Reuter said that they will be greatly cheaper than conventional helicopter rides, and will aim to reach the prices of private-hire car services.

The approximate cost of a 20km journey on a helicopter in the United States is $350.

Volocopter's air taxis can take a maximum payload of 160kg and has a rate of climb of up to 3m per second. It has a maximum airspeed of 100kmh and at a cruise speed of 50kmh, it has a flight time of less than half an hour. 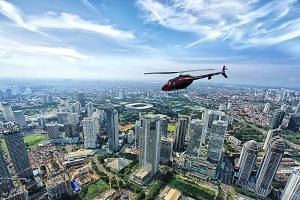 Uber looks to soar with flying taxis by 2020

Singapore is currently looking at how air transport can be used to enhance the transport landscape here, according to the deputy director of transformation programmes at Civil Aviation Authority of Singapore (CAAS) Tan Chun Wei.

"In Singapore, you know that we talk a lot about smart nation, smart mobility, and this whole urban area mobility thing is totally blurring the lines of transportation. Going forward, we are looking at how we can use air transportation to complement our land transportation," said Mr Tan, who took part in a panel discussion with Mr Reuter.

But he added that this comes with its own set of challenges, which CAAS is still working to understand. Volocopter and CAAS have been collaborating to establish the scope of test flights and ensure that they meet necessary requirements.

In September 2017, Volocopter performed a public unmanned test flight in Dubai, where it partnered with the country's Roads and Transport Authority.

Mr Reuter said: "Helicopters today are very useful, but they're not used very much because of these constraints, safety and noise. Volocopter addresses these constraints, and therefore we believe we have a completely new mode of transportation available now, and will also be very valuable for certain applications in Singapore."