The 32-year-old had reportedly looked shaken after his bout with YouTube personality Steven Lim and had to be helped out of the ring. Pradip was rushed to Singapore General Hospital where he died.

It is understood that all fighters, including "celebrity fighters" Lim and Pradip, went through a medical check-up and signed a declaration form acknowledging the risks involved.

The youngest of three siblings, Pradip leaves behind his twin brothers Saravanan and Shanmugam, 43. His mother is VT Devi, 65, while his father is Subramanian, 67. 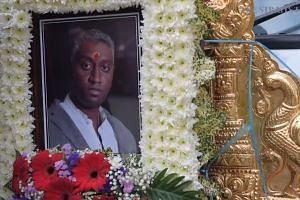 Pradip's father said they were initially unaware he was taking part in the fight. He went down to watch him fight and did not want to discourage him because he was in his gear and ready to fight.

Lim, 41, said in a Facebook post: "This is a very sad moment for me to learn about the shocking news! You taught us all the virtues of being fearless and strong and the importance of keeping an active and fit lifestyle. My deepest condolences to you... You are truly our hero."

Pradip, a veteran bodybuilder, was not originally slated to fight, but on Friday (Sept 22), he was announced as a late replacement after former Singapore Idol finalist and singer Sylvester Sim withdrew from the bout citing insurance problems.

"Our beloved son passed away suddenly," his family said in a Facebook post, adding that the wake would be held at Woodlands Street 81, Block 807, on Sunday.

A statement from organisers Muay Thai boxing gym Muse Fitness Singapore and Axseed Events read: "We are deeply saddened to share the news that Mr Pradip Subramanian, Exhibition Match-Up fighter and President of the World Bodybuilding and Physique Sports Federation of Singapore (WBPF) has passed away at the Singapore General Hospital (SGH) on 23rd September 2017 at 21:00 hrs.

"We are in close contact with the medical staff at the hospital to ascertain the cause of death and request that during this difficult time we should come together and extend our support to Mr Subramanian's family, friends and associates and refrain from any speculation.

The local governing body of muay thai, Amateur Muaythai Association (Singapore) president Mervyn Tan said: "We are shocked, saddened and perplexed by what happened. It was a tragic incident."

Pradip's project, the AFC Physique Championships which is scheduled to take place on Sunday (Sept 24), will be cancelled as a mark of respect, the statement said. The organisers added that they will hold an official press conference or issue a statement in due course.

Pradip's cousin Roger Rajan, 45, rushed to SGH after he received the news. He said: "The whole family is in shock and no one knows, even them, how did he get involved in this fight. We are all confused.

"He's a bodybuilder and gym consultant. He's not a qualified fighter. We don't know how he was approved for the fight."'

His niece Joyce Roger, 23, said of her uncle, who she called chittappa, or uncle in Tamil: "My father and him were really close and just a few days before the fight, they met. I remembered my father saying that he (Pradip) said he was feeling unwell and we thought that he wasn't going to fight.

"But turned out that he had to step in to be a replacement.

"He told daddy that he was not going to take part because he wasn't feeling well.

"I think I wouldn't be able to sleep tonight. It's a great loss for our family."

Singapore's muay thai exponent Bryan Tee, 19, was one of the participants who fought at the event. He said: "After the fight, he (Pradip) was in a corner and he looked exhausted, like in a normal knock-out, which was quite normal for the sport and it didn't look so serious.

"Then he slowly went down in the corner, and he was later carried out. We only found out later through Facebook what happened.

"He wasn't supposed to be fighting, he's a bodybuilder, so he might not be that well-conditioned for this fight. Because a bodybuilder might not work much on their cardio but we do a lot of cardio workouts."

Kevin Chiak, who is the founder and president of local bodybuilding competition FM (Fitness Movement) League thrice a year for the last five years, noted the differences between bodybuilding and combat sports.

A bodybuilder himself, the 51-year-old said: "When we train for bodybuilding, yes it is a matter of time that we build muscles and on the competition day itself, it is a purely a display of muscles. There is no contact between people.

"In contact sports, having the skills and cardio capability is most important. If a bodybuilder wants to take part in a fight, he has to be trained for it, no matter how friendly the fight is.

"The main consideration is: Was he trained as a fighter? If not, that's too risky and dangerous."

He was linked to bribery violations, allowing several athletes who had failed doping tests to compete at the Doha Asian Games in 2006.

Chua was the former chief of the now-defunct Singapore Bodybuilding and Fitness Federation, which was dropped as a National Sports Association in 2013.

The Asia Fighting Championship and the Physique Championship were supposed to be the two highlights of the Asia Fitness and Health Expo. Held for the first time this weekend (Sept 23/24), it is a two-day event featuring health talks and workout sessions like zumba and yoga.