LONDON (AFP) - A complete ban for the entire Russia team from next month's Olympic Games in Rio is "not impossible", the founding president of the World Anti-Doping Agency (WADA), Dick Pound told Britain's Sunday Times newspaper.

The Russia team is now ruled out of all events in athletics in Rio, although Russian athletes training outside the country can apply to compete as neutrals at the Aug 5 to 21 event in Brazil. 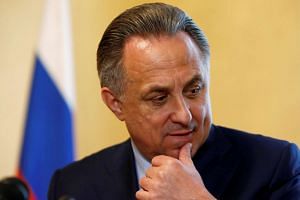 The IAAF's decision was endorsed by the International Olympic Committee on Saturday (June 18).

But there are concerns that the scale of Russia's breaking of doping rules extend beyond just track and field.

In May, WADA set up a new investigation under Professor Richard McLaren, a Canadian law professor and longstanding member of the Court of Arbitration for Sport (CAS), into allegations of state-backed doping at the 2014 Sochi Winter Olympics in Russia.

Grigory Rodchenkov, the former head of the Russian lab now living in Los Angeles, also gave an interview to the New York Times last month in which he said he switched tainted urine samples for clean ones at the doping lab used for the Sochi Games, with help from people he believed to be officers of the Russian security services.

McLaren, who is due to deliver his full report by July 15, has also looked into doping allegations surrounding the 2013 athletics World Championships in Moscow.

In a statement issued on Friday, McLaren said he had the evidence that Russia's Ministry of Sport was involved in instructing a Moscow laboratory to "not report positive sample results over the period before, during and after" the 2013 World Championships.

Meanwhile a joint newspaper report investigation by Britain's The Times and Germany's Frankfurter Allgemeine published Friday alleged that two men at the centre of Russian doping revelations in athletics were said to have offered to exempt the country's swimmers from drug-testing in return for an annual fee.

"Kicking the Russia team out of the Rio Games would be the nuclear option," Pound told the Sunday Times.

"But it's not impossible. This investigation into Sochi has come about because of allegations made by Grigory Rodchenkov, the former head of the Moscow anti-doping laboratory, and he was high enough up in the Russian system to know what was going on," he added.