TOKYO (REUTERS) - The marathon race at the Tokyo 2020 Paralympics will start 30 minutes earlier than originally scheduled, as part of the organisers' efforts to tackle the heat threat to athletes and fans in the Japanese capital.

With less than a year to go until the start of the Olympics, the Games' ability to contend with extreme heat is a key talking point, particularly after a worker at a Tokyo 2020 construction site died on Thursday (Aug 8), with heatstroke suspected as the cause.

Soaring temperatures have killed at least 57 people across Japan since late July, highlighting the possible health threat to athletes and fans.

While announcing the full schedule of the Paralympics, which runs from Aug 25 to Sept 6, organisers said changes were being made to accommodate the high temperatures, including starting the marathon at 6.30 am.

"As it has been discussed a lot, the heat countermeasures are something we must take into consideration. Even though it will be held at the end of August it will still be hot," said Games director Koji Murofushi.

"From the 'athletes first' point of view, the start time of marathon has been moved 30 minutes early from 7 am to 6.30.

"For triathlon, we moved the start from 8 am to 7.30 and for equestrian, by adding a day to the duration of the competition from four to five days, we avoid having the competition at the hottest time of the day." Besides high temperatures, organisers may have to contend with Japan's notoriously devastating typhoon season, which usually runs from July to October.

Murofushi did not provide details of Tokyo 2020's measures should a huge typhoon hit during the Paralympics but said a contingency plan was in place. 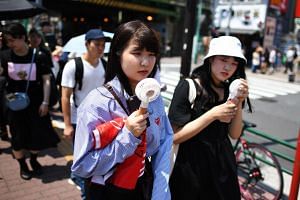 "Basically, we aim to hand all the medals to athletes - this is what we aim to do foremost - by the closing ceremony," added the former Olympic gold medallist hammer thrower.

"Of course, there will be various situations where we cannot hold a competition and we aim to create the contingency plan accordingly.

"There is an extra day planned, but this is not something we will announce in advance." Tickets for the Paralympics will go on sale for Japanese residents in a lottery starting on Aug 22, with ticket prices for groups and families starting for as little as 500 yen (S$6.60).

The low-priced tickets are aimed at under-12 children and those with disabilities in a bid to boost attendance and interest in the Games.

The most expensive tickets are for the opening ceremony on Aug 25. The highest category will cost 150,000 yen while the costliest sports are the finals of the swimming and wheelchair basketball.

Men's wheelchair basketball - one of the most popular events at any Paralympics - is the final medal event and will be held before the closing ceremony on Sept 6.