SINGAPORE - US Open champion Naomi Osaka of Japan will make her debut at the 2018 BNP Paribas WTA Finals Singapore presented by SC Global, from Oct 21-28, the organisers announced on Tuesday (Oct 2).

The 20-year-old world No. 6 is the third singles player to qualify for the season-ending tournament, to be held at the Singapore Indoor Stadium for the last time before it moves to Shenzhen in 2019, after Simona Halep and Angelique Kerber.

Osaka, the first Japanese Grand Slam singles champion, will be the first player from her country to play in the WTA Finals in 15 years, after Ai Sugiyama's appearance in 2003.

In 2015, Osaka won the WTA Rising Stars Invitational, which was part of the WTA Finals, when she beat Caroline Garcia in the final.

"Qualifying for the WTA Finals is a huge accomplishment," said Osaka, who beat tennis great Serena Williams to win the US Open in September.

"Winning the WTA Rising Stars Invitational in 2015 helped give me the confidence to play on the big stages so I am excited to go back to Singapore and compete with the top players of the season."

The WTA Finals is a 10-day tennis festival featuring the world's best players vying for a US$7 million (S$9.56m) in prize money and two of the most prestigious titles in women's tennis. 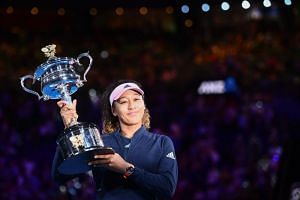 Tennis: 8 things to know about the new world No. 1 Naomi Osaka

The top eight singles players will compete in a round-robin format with the winner taking home the Billie Jean King Trophy.

The top eight doubles teams will compete in a knock-out format for the WTA Finals Martina Navratilova Trophy.