The 20-year-old Japanese was broken on her first two service games and had tears in her eyes as the match threatened to slip away in the second set.

But the world No. 6 gathered herself and - although she continued to look glum and flung her racquet about - found the resolve to pull through over three nail-biting sets.

Osaka faces either of the unseeded duo of Latvia's Anastasija Sevastova or Slovak Dominika Cibulkova in the last four.

The 45th-ranked Zhang - with the Beijing crowd on her side - raced into an early lead against an unusually erratic Osaka, who had won 24 of her previous 28 games.

But she continued to rack up errors and conceded the first set when she hit into the net. She was to make 66 unforced errors in all. 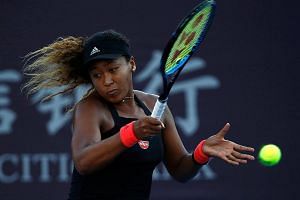 The 29-year-old Zhang, who has won two career WTA singles titles, saved six break points to take the lead in the second set.

Zhang broke to go 2-0 up and Osaka - who has admitted struggling with the fall-out from the US Open final, when Williams rowed with the chair umpire - began welling up.

But Osaka defied her emotions to avoid the upset, although she barely raised a smile even in victory.

In the men's quarter-finals, the Italian Fabio Fognini continued his march towards a fourth title of the season with a 6-4, 6-4 victory over Marton Fucsovics of Hungary.