A wildly unpredictable match veered one way, then the other, before Romanian Halep ended Kerber's resistance on her fourth match point in a spellbinding deciding set that pushed both players to the limit of their endurance.

Former champion Kerber, who won only five points in losing the opening five games, was jelly-legged at times but fought off two match points in the 10th game of the third set before seeing two of her own go begging two games later.

Halep's insatiable desire for a maiden Grand Slam title proved the key ingredient in the end as an exhausted Kerber struck a backhand over the baseline.

She will now face Denmark's Caroline Wozniacki in the first Australian Open final between two players still chasing one of the four majors since 1980.

To add spice to the showdown between the top-two seeds, the No. 1 ranking is also on the line. 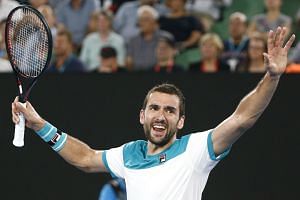 "I had confidence in myself. I said to myself, 'I will fight for every point and have a big rest after the tournament'," Halep, who also saved match points in a three-hour marathon against Lauren Davis in round three, said on court.

"I tried to be calm but today, I was like a roller coaster, up and down. If you don't give up, you can win the match in the end. I'm really proud of myself actually."

She will need to dredge the depths of her energy reserves against Wozniacki if she is to join the Grand Slam winners' circle after losing two heartbreaking French Open finals.

Halep predicted a marathon against former world No. 1 Kerber but when she charged to a 5-0 lead in 14 minutes, it looked as though she might have caught the German on an off-day.

However, Kerber roused herself to win 12 of the next 13 points and although Halep closed the set, the touch-paper had been lit.

It felt like Halep was turning the screw when she ran a red-faced Kerber into the ground to seize a 3-1 lead in the second set, but the match was about really catch fire.

Kerber broke back in the next and saved two break points at 3-4 before breaking Halep in the next game when the Romanian struck a wayward backhand into the tramlines.

A netted forehand by Halep set up a decider that will go down as one of the most memorable witnessed at Melbourne Park.

At various times, both players were left propping themselves up with their rackets, lungs heaving, as the rallies grew ever more excruciating.

Kerber won a 22-point exchange featuring drop shots, moon balls and impossible gets to break at the start of the third, but Halep hit back immediately and eventually worked her way into a 5-3 lead.

The world No. 16 was literally on her knees when she struck a sensational backhand to win a 26-point exchange to break back.

Halep had two match points at 5-4 but watched a Kerber winner fly by before missing a backhand.

She began to feel the strain, looking daggers at her coach Darren Cahill as Kerber broke to lead 6-5 and then led 40-15, only for Houdini-like Halep to extricate herself.

It was exhausting to watch as the battle raged on but Halep found some extra aggression, crashing two forehand winners for an 8-7 lead before holding her nerve to finish it.

Wozniacki came through a late bout of nerves to reach the final for a first time with a 6-3, 7-6 (7-2) victory over Belgian Elise Mertens.

The Dane had dominated her second Melbourne Park semi-final until she was 5-4, 30-0 up and serving for the match but suddenly faltered with a pair of double faults to allow her 22-year-old opponent back into the contest.

Mertens, playing only her fifth grand slam event, took full advantage and, unleashing a string of winners, broke the former world No. 1 and racked up two set points.

Unlike in her 2011 semi-final against Li Na, when she blew a match point, Wozniacki was able to recover her composure and saved them both on the back of a couple of booming serves.

After four deuces, the 27-year-old held with a thumping forehand then raced away with the ensuing tie-break to seal a title decider.

"I got really tired at 5-4," she said on court. "After the two first good serves, I thought, 'Calm down, it's all good', then it kind of wasn't good any more.

"I felt like my legs were shaking a little bit. I was like okay 'This is not normal, I'm not sure what I'm supposed to do now', I just took a few deep breaths and once she had set point, I said, 'Well, I guess it is the third set. I guess now you just need to go for it'.