The 30-year-old Russian, who has won five Grand Slams and is among the highest-paid athletes in the world, returned to action on Wednesday with a straight sets win over Roberta Vinci following her suspension for the use of banned substance meldonium.

She has yet to to drop a set in Stuttgart where she has won the title three times.

“I settled down a bit (compared to Wednesday). I executed a great plan today and I was really glad I pulled that off,” Sharapova told reporters. “Practicing is so different to matches, you cannot compare it. You just have to trust the work you have put in. It’s great to come out and play matches. Being in the quarter-finals again is special.”

Sharapova, who had tested positive for the banned substance at the 2016 Australian Open, picked up where she had left off against Vinci, powering through her first two service games without dropping a point but struggling somewhat with her return consistency. 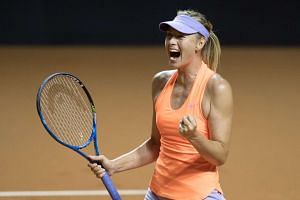 Makarova cleverly mixed up the height and depth of her shots during rallies on the very quick Stuttgart clay with Sharapova still lacking match practice.

Makarova wasted her only break opportunity at 5-5 and Sharapova never looked back. She earned her first break points a game later, powering a crosscourt forehand winner to grab the first set.

She broke Makarova twice in the second set to race 5-1 ahead and served out the match with an ace to set up a quarter-final clash against Estonian qualifier Anett Kontaveit Sharapova received a wild card for the tournament, having lost all her ranking points in the wake of her suspension, and she has also been invited to play in Madrid and Rome – moves that have angered some players.