MELBOURNE - Naomi Osaka cringed when asked in an interview on Australian television if she was ready to become the face of the 2020 Olympics in Tokyo.

"Yikes," the newly-minted Australian Open women's champion said, wincing. "Hopefully, for their sake, they don't do that."

The 21-year-old Japanese is shy and reserved but certainly not short on confidence.

When the new world rankings come out today, the reigning US Open champion will become the first Asian singles player, male or female, to reach No. 1.

On Sunday (Jan 27), she laughed off suggestions that her meteoric rise had put her under pressure, saying that she was not satisfied with back-to-back majors and hoped to complete a "Naomi Slam" after her success at Melbourne Park.

"The way the tennis world is, there's always the next tournament, the next Slam, and we all just want to keep training hard and winning more," Osaka told reporters as she posed with the Daphne Akhurst Memorial Cup at the Brighton Beach in Melbourne. "So I'm not really sure if I'm satisfied."

Osaka became the first woman to win successive majors since Serena Williams in 2015 and the youngest since Martina Hingis in 1998. 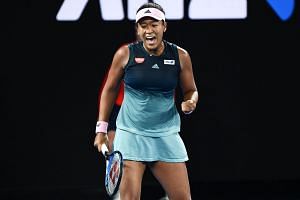 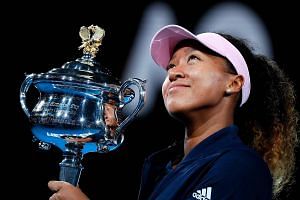 Naomi Osaka: This world No. 1 has 'character'

Williams went on to complete her second "Serena Slam" - holding all four majors in the same 12 month period - and Osaka was excited about the prospect of claiming the French Open and Wimbledon to emulate her idol's feat.

"I'm not going to lie and say that thought hasn't crossed my mind," Osaka said. "For me, I just have to take it one tournament at a time, especially Indian Wells is coming up and I won that tournament last year. I feel like I have to think about that."

While her maiden Grand Slam was marred by losing finalist Williams' tirade at the umpire and boos from the Flushing Meadows crowd, Osaka was allowing her follow-up success in Melbourne to soak in.

"It means a lot. I think moments like this are what you train for as a little kid to play the Grand Slams," she said. "To win another one is definitely a dream come true."

Osaka was unfazed by the attention she was receiving, saying she was in the spotlight even when her ranking was languishing in the 70s. She said it was misleading to view her rise as an overnight success.

"I guess looking from the outside, from you guys' view, it does," Osaka said. "For me, every practice and every match that I've played, it feels like the year is short and long at the same time.

"I'm aware of all the work that I put in. I know all the sacrifices that every player does to stay at this level. In my opinion, it didn't feel fast. It felt kind of long."

Osaka added that she had learnt about resilience at the Australian Open after completing three three-set matches on her way to the title, likening herself to "a robot" in the final set against Petra Kvitova.

Quizzed about off-court pressure that accompany life as a tennis superstar, Osaka said she preferred to concentrate on her game.

"I feel like I'm going with the flow. That's sort of been my motto my whole life," she said.