(REUTERS) - Maria Sharapova overpowered Alison Riske 6-3 7-6(4) at the Cincinnati Masters on Monday (Aug 12) to set up a tantalising second-round battle with world No. 2 Ashleigh Barty, who defeated the Russian at this year's Australian Open.

Sharapova struggled at times with her accuracy but unleashed some massive serves and played stout defence at key moments on her return to the tournament after a five-year absence.

Fellow tournament wild card Riske looked poised to send the match to a third set when she was serving on 5-3 and 15-0 in the second set but Sharapova upped her game to force a tiebreaker.

Former world No. 1 and five-time Grand Slam champion Sharapova prevailed on her fourth match point to set up the meeting with top-seeded Barty.

Barty defeated Sharapova in the fourth round of the Australian Open in January and both will be looking to sharpen their games ahead of the US Open later this month.

Another former world No. 1, Caroline Wozniacki, fell to rising Ukrainian teenager Dayana Yastremska 6-4 6-4 under the lights to close out the day's action.

The unseeded Dane had her opportunities but converted just four of her 15 break-point chances against Yastremska, who was making her Cincinnati debut. 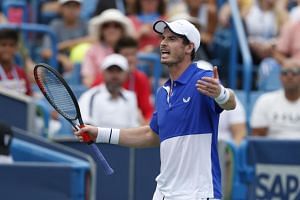 Johanna Konta suffered her second straight first-round exit at a tournament as she fell 6-3 3-6 7-5 to qualifier Rebecca Peterson in a marathon first-round match.

The 14th-seeded Konta's biggest weakness was her second serve as the Swede won 62 per cent of those points against the error-prone Briton.

Svetlana Kuznetsova upset 11th-seeded Anastasija Sevastova 7-6(3) 6-7(4) 6-4 in their first-round battle to set up a second round clash with Yastremska.

Seven-time Grand Slam champion Venus Williams moved through the first round when she defeated compatriot Lauren Davis in straight sets earlier in the day.

Wild card Williams won 7-5 6-2 on centre court as she maintained her streak of never having lost a set to Davis, having beaten her four times.

Williams fended off seven of the eight break points she faced, and won 61 per cent of points when returning the Davis second serve.