Djokovic, the top seed who has been nursing a wrist injury since a shock first round loss at the Olympics, begins his campaign against big-serving Jerzy Janowicz of Poland.

Janowicz, a Wimbledon semi-finalist in 2013, has been plagued by knee trouble in recent months and has seen his ranking slump to 228 in the world.

Fourth seed Nadal, a gold medallist at the Olympics in doubles after missing Wimbledon due to a left wrist injury, faces Denis Istomin of Uzbekistan in his first round match.

The two clashed in an angry match in Munich last year where Murray described Rosol as one of the most hated players on the tour. 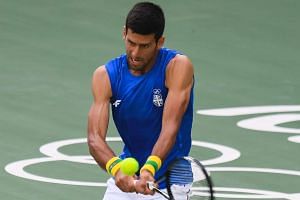 Tennis: 'I'm not 100 per cent', admits US Open champion Djokovic

With Roger Federer missing the tournament due to a knee injury which has shut down his season, fellow Swiss Stan Wawrinka takes the third seeding.

Wawrinka begins against Spain’s Fernando Verdasco and could face fiery Australian Nick Kyrgios in the round of 16.

Juan Martin del Potro, the 2009 champion and Olympic silver medallist, looms large as a potentially dangerous last-eight opponent for Wawrinka. The giant Argentine knocked Wawrinka out of Wimbledon this year.

In the women’s draw, Serena Williams, bidding for a seventh US Open title and a modern era record 23rd Grand Slam, begins her campaign against experienced Ekaterina Makarova of Russia.

Makarova, the world number 36, reached the semi-finals in 2014, losing to the American in straight sets.

But she beat Williams in the round of 16 at the Australian Open in 2012.

Williams, 34, comes into the US Open after suffering a shoulder injury which forced her out of the Cincinnati event last week.

Williams lost in the semi-finals to Roberta Vinci 12 months ago in New York.

Adding extra spice to the event is the possibility for her to break Steffi Graf’s record of 186 consecutive weeks atop the world rankings, and surpass Chris Evert for most US Open singles titles won in the Open Era.

Fifth seed Simona Halep of Romania meets Kirsten Flipkens of Belgium in the first round. Halep and Williams could meet in the quarter-finals.

Stephens, who made the fourth round in New York in 2013, had been on a poor run of form in recent weeks.

Since exiting Wimbledon in the third round, Stephens lost three consecutive first rounds at Washington, Montreal and the Olympics.

This year’s US Open is missing both Victoria Azarenka who is pregnant and former champion Maria Sharapova who is serving a doping suspension.