WASHINGTON (AFP) - Three-time Grand Slam champion Andy Murray says he is "quite close" to being able to play singles matches and a "best-case scenario" could see it happen at Cincinnati in two weeks.

The 32-year-old British star, who feared he could be forced into retirement before undergoing right hip surgery in January, returned to the court in June but has played only doubles while rehabilitating and seeing how his hip responds.

"In terms of moving and feeling and waking up the next day, I'm feeling good," Murray said. "I'm quite close but there's stuff that would need to get better."

Murray, paired with brother Jamie in men's doubles at the ATP Washington Open, said on Monday (July 29) he feels no hip pain and will practise singles this week while playing doubles and plans to do so against next week in Canada.

"I'll play singles as soon as I feel ready," Murray said. "I'm going to practise singles and play doubles to compete and each week I'll see. I'll keep on that path until I'm ready."

Murray, the former world No. 1 who is now ranked 222nd, played down the idea he might compete in the US Open, which starts Aug 26, but didn't slam the door on the possibility.

"Best case scenario probably would be Cincinnati," Murray said. "If I wasn't in Cincinnati, I would probably wait until after the US Open.

"I wouldn't want my first tournament to be playing best-of-five (sets) either." 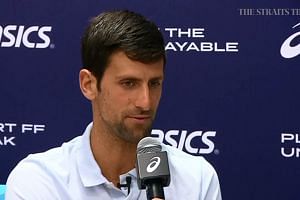 But Murray, whose Grand Slam singles titles include the 2012 US Open and 2013 and 2016 Wimbledon crowns, warned he has hopes of regaining his peak form.

"I'm playing better than I was last year. I can extend my leg behind me. I can push off for serves. It's brilliant," he said.

"The question I have now is why not? Why can't I get back where I was? What's the reason? There isn't one. It just takes time."

Earlier this month at Wimbledon, Murray said it would be up to 18 months before he returned to singles and the US Open was a "pretty unlikely" prospect.

"I'm closer than what I maybe thought I was," Murray said. "After Wimbledon I started doing a few singles drills. At one point brief practices. It felt great.

"This latest comeback I didn't have any particularly high hopes. I've had high hopes for most of them before."

Murray played a set on Sunday and about eight games on Monday in the US capital heat but is missing match fitness instead of fighting hip pain.

"The conditions here are tough and that's the thing I'm needing. My conditioning isn't great. My time in the gym has been on strengthening the hip," Murray said.

"These last few months have been brilliant. Just not being in pain, it's amazing what that will do to you."

Murray said if he had to play singles next week, "I could do it, but to get where I would want to be I'd have to get back in the gym and get my cardio better".

Murray's most recent singles match was a five-set first-round loss at the Australian Open in January to Spaniard Roberto Bautista Agut. Murray delayed his flight home due to hip pain.

"It was completely gone. I wasn't even certain after the operation if I'd ever be healthy again," Murray said.

"A few months later I'm feeling better and feel like I can get back on the singles court."

Last year at Washington, Murray won a rain-delayed third-round match at just after 3am, weeping at the end of the match he was so overcome with emotion at gutting out a win through the pain. He withdrew later that day.

"Here last year I was just in a lot of pain," Murray said. "I was struggling a lot. It was really bad. I was upset. My hip was really, really painful."

After trading harsh words with tournament officials then, both Murray and organisers have moved past the tough moment.

"What happened last year was a shame," Murray said. "I was going through a tough time when it happened. I like it here. I'm happy to be back and have the opportunity to play with my brother again, which I haven't done for three years."

Jamie Murray, 33, won the Washington doubles title last year with former partner Bruno Soares. The Murrays have not played together since the 2016 Rio Olympics but did help Britain's 2015 Davis Cup victory.