BRISBANE (AP/AFP/REUTERS) - Ash Barty was flying home across Australia following the Fed Cup final when she saw the early signs of devastation from the wildfires that are still raging in large parts of the vast island continent.

So the problem has not just dawned on her, the highest-profile tennis star in Australia, like it may have for some players arriving for the season-opening events. But the scale and gravity of the situation is really hitting home.

Barty went to a nearby animal shelter after she returned from the Fed Cup loss to France in Perth last November and donated money, because at that stage, animals were the main casualties of the flames.

Now, with Australia in the grip of its worst wildfire season in recorded history and with a human death toll of 24, she is joining the fundraising for a bigger relief effort.

The world No. 1 Barty is donating any prize money she wins at the Brisbane International, her home tournament, to the Australian Red Cross for the recovery effort. The winner of the tournament, which starts on Monday (Jan 6), will earn more than US$250,000 (S$337,000).

"It's been really terrible, it really has. For me this started two or three months ago," Barty said of the damage caused by what Australians commonly call bush fires. "We have to remember, this has been going on for a long time across our whole country. The first I saw of it was actually flying home ... to the east coast and we could see some of the smoke and some of the fires.

"Obviously the worst of it is still out there at the moment. Now it's not just the wildlife, it's also affected Australians with their lives and their homes."

She is not the only athlete who has sprung into action.

Fellow Australian Nick Kyrgios was among the first tennis players to pledge, promising A$200 (S$187) for every ace he hits this month. He served 20 in Australia's opening win at the ATP Cup.

Even non-Australian players are chipping in.

Romanian women's world No. 4 Simona Halep has devised a unique way to support relief and recovery efforts: She will donate money every time she yells at her Australian coach, Darren Cahill. 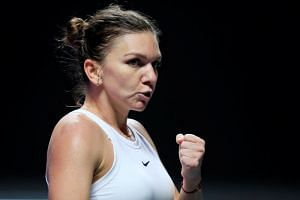 But, Halep noted, serving is not her strength.

"Well guys, you know I love Australia, but you also know I don't hit too many aces," she wrote on Twitter. "Sooo I want to help and my pledge is this... every time I give @darren-cahill a hard time in my box during all my matches in Aus, I will donate $200," she added. "This way I will raise a lot more money."

Halep, who resumed working with Cahill last year after the pair split late in 2018, often animatedly remonstrates toward her box during matches.

Alize Cornet of France, who like Halep is not known for her serving prowess, came up with a fundraising idea of her own.

"These bushfires in Australia are tearing my heart apart... And as Simona was saying, I won't be raising much money either if I have to count on my serve! Sooo I will donate 50$ for every drop shot winner that I'll make at the Australian Swing. Much more efficient," she said on Twitter.

It also made a A$1 million donation to help communities repair and rebuild tennis facilities damaged or lost in the bushfires.

And at the ongoing ATP Cup, organisers announced that each ace served will deliver A$100 to the Australian Red Cross bushfire disaster relief and recovery efforts.

"With more than 1,500 aces expected to be served, the tournament contribution is expected to exceed A$150,000," it said on Twitter.

Tennis Australia chief Craig Tiley said he was working with the ATP and WTA to extend the move to all tournaments in Australia this month, including at Brisbane, Adelaide and Hobart.

Two of the biggest hitters in cricket, Chris Lynn and Glenn Maxwell, said they would donate A$250 for every six they smash during the ongoing Big Bash League Twenty20 tournament.

"Hey Guys, for every six I hit in this years Big Bash League I will donate $250 towards the Red Cross Bushfire Appeal," tweeted Lynn. "It is special to see so many athletes from various sports getting in behind the real heroes who are fighting to save lives and properties around our country." 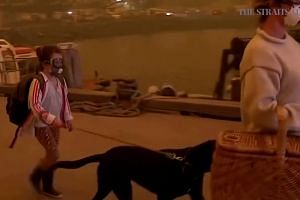 American basketballer LaMelo Ball has pledged to donate some of the salary he receives from the National Basketball League's Illawarra Hawks to victims.

Ball, tipped to be chosen in the first round of the National Basketball Association draft this year, said he will donate one month of his salary, an amount that was not disclosed.

"It's sad to see what is happening on the south coast of Australia," Ball said. "People have lost their homes and everything they own. My parents taught me to help out wherever I can, so this is my way of helping out."

While the fires have mobilised athletes and sports administrators, conditions have also caused concerns about health and safety for players, particularly in tennis and cricket which are such a big part of the Australian summer.

Seven-time Australian Open champion Novak Djokovic is among those who have talked about the possible effects of the wildfires on the season-opening Slam, suggesting the start may even have to be delayed if the air quality around Melbourne is less than ideal.

Barty said most players would agree the timing of the tennis was less important than safety.

"First and foremost, the reason that there is smoke in the air is what's most devastating at the moment for our country," she said. "It's just a really tough time. Tennis is a sport, it's a game that we play, and there are certainly a lot of bigger things going on in Australia right now that we need to take care of.

"So, I mean, if it meant that we were delayed by a day or two ... it really doesn't matter. What matters is that Australians stay safe and we kind of sort out the bigger issues."

Tennis "is a game that we love, yes, and we try and be the ultimate professionals and do everything that we can, but it is a game. You need to put things into perspective and worry about the bigger things in life first".