The partnership, a two-year contract worth a six-figure sum, will offer a developmental pathway from beginner to elite levels at an affordable price - 10 weekly sessions cost $130 in total. This works out to between $6.50 to $8.60 per hour.

Hourly group lessons at private tennis academies here can start from more than $20 per hour.

Voyager is a multi-award winning tennis academy that has developed multiple national champions and professional players in Australia. It is also where Ethan Lye, one of Singapore's top junior players, trains at. In 2018, Voyager partnered the McDonald College to win the Australia Tennis School Championships and also took fifth place in the World Tennis School Championships.

Sport Singapore (SportSG), then called the Singapore Sports Council, had in 2011 explored a partnership with Barcelona's Sanchez-Casal Tennis Academy and three years later met Carlos Rodriguez, the former coach of two-time Grand Slam champion Li Na, to discuss the possibility of a collaboration.

SportSG chief executive Lim Teck Yin told The Straits Times on Wednesday (Sept 4) that such a partnership was not feasible at the time "given the state of development of the tennis scene in Singapore then".

But, referring to the popularity of the tennis courts at Heartbeat @ Bedok, he added: "What has changed is there's a growing interest not just in the central district but also further afield, (that) people want to play good quality tennis. 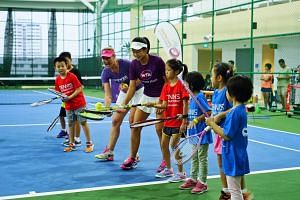 Tennis: ActiveSG tennis academy brings the sport to the masses

"When we were running our tennis academy there were a lot of people wanting to come and try... we've made tennis more affordable and accessible."

Voyager managing director Ryan Henry said: "We are really excited to be given the opportunity to bring our expertise to Singapore and to work with the many talented players in this country. We hope, over the next couple of years, to contribute towards producing more Team Singapore athletes that will make the nation proud in international competitions."

Singapore Tennis Association president Clement Leow added: "This partnership will make it more accessible for Singaporeans to take up tennis as well as to progress in the sport. This can only bode well for tennis in Singapore. We will work together with Sport Singapore and Voyager to strengthen our national team."