Russian-born tennis star Maria Sharapova, 28, has revealed that she tested positive for a recently banned drug at the Australian Open, but claimed to have no knowledge the substance was prohibited.

Here are eight things you may not know about one of the world's best women tennis players of all time:

It was the 1986 Chernobyl disaster than brought a young Sharapova and tennis together. 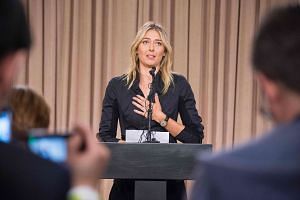 Her father Yuri Sharapova and then-pregnant mother Yelena left their hometown Gomel, which was just three hours from Chernobyl, so their newborn child would not be exposed to the radiation.

They eventually landed in Sochi where their young daughter, born on April 19, 1987, trained with some of Russia's best tennis coaches.

She was given her first racket at four years old.

By the age of seven, her talent was obvious. Her father took her to Florida, seeking to be enrolled in the Nick Bollettieri Tennis Academy, which has produced many top players.

Neither could speak English then, and he had to borrow money for their expenses. There, he initially worked low-wage jobs around the clock to save enough for her to enrol in the prestigious Rick Macci Tennis Academy.

Sharapova shot to fame in 2004 when she beat defending champion Serena Williams to win her first Grand Slam title at age 17.

She was then the third-youngest woman to win the Wimbledon title.

At her Olympic debut, at the 2012 London Olympics, she won a silver medal for Russia, losing to US player Serena Williams.

It's been said that Sharapova's grunts have been measured at more than 101 decibels - louder than a pneumatic drill.

Some fans love it, others find it unseemly, some of her opponents have complained about it, but it has become part of her signature style.

It certainly signals her resilience and ferocious need to win.

There's no doubt Sharapova is a tennis prodigy, but the statusque blonde's (she is 1.88m) popularity and ability to attract endorsements was way above all other competitors.

While she turned professional at age 14, she was already signed with marketing giant IMG and landed a clothing deal with Nike at age 11.

Since then, she has been endorsing prestigious global brands such as Tag Heuer, Porsche and Evian.

But her image and popularity is in question in the wake of the doping fiasco. Hours after her announcement, Nike announced that it  would suspend its relationship with her while the investigation was ongoing.

She has been the top sportswoman on Forbes' highest paid athlete list for the past decade, with endorsement earnings way above her salary and earnings from tennis. Still, with US$29.7m last year, she was only the 26th highest-paid athlete in 2015.

She told BBC in 2013: "Business and sport are both very competitive worlds, and I want to be the best in both."

Besides her endorsement deals, she has designed her own line of apparel and accessories for both Nike and Cole Haan.

Her candy brand Sugarpova was officially launched in Singapore in 2014. The plan is to grow Sugarpova into a lifestyle brand which may also sell home goods, sleep and loungewear.

Her middle name is Yuryevna.