SINGAPORE - The Singapore Table Tennis Association (STTA) has dropped world No. 6 Feng Tianwei, Singapore's most-bemedalled Olympian, from the national team, in a move that has sent ripples across the local sporting fraternity.

An STTA statement sent on Tuesday (Oct 25) said: "Feng Tianwei, who has been a member of the national team since 2007 and who will be 34-years-old during the Tokyo Olympics, does not fit into the STTA's current plans for rejuvenation."

It added that the move is part of its new high performance plan, following a lacklustre outing at the Rio de Janeiro Olympics, where the Singapore's women's table tennis team returned empty-handed for the first time in three editions.

In the same statement, STTA president Ellen Lee said: "Feng Tianwei has been a cornerstone of the national team since 2007. She has brought many golden moments to the sport.

"We would like to thank her for all that she has done for Singapore table tennis, and we would like to take this opportunity to wish Tianwei all the best in her future endeavours."

Feng, 30, whose playing contract with the STTA ends on Oct 31, could not be reached for comment.

Sport Singapore (SportSG), the agency that governs local sport, said: "Sport Singapore has been kept updated by STTA regarding its plans for our top table tennis players.

"We will discuss with Feng Tianwei, STTA and SNOC on the option of supporting her under the spexScholarship scheme, and the performance targets and milestones expected of her."

"With the Tokyo 2020 Olympic Games in mind, moving forward, we will work closely with the STTA and SportSG to select the best athletes to represent Team Singapore for the upcoming major Games." 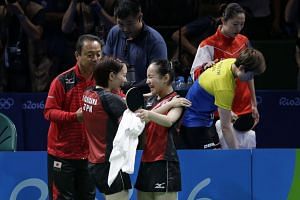 The news comes a day after Li Hu, the nation's second-highest ranked men's player, was sacked for violating house rules.

Feng, together with former team-mates Li Jiawei and Wang Yuegu, won a team silver at the 2008 Olympics. The trio won a team bronze four years later, while Feng added a bronze in the singles event.

Her singles bronze was Singapore's first individual Olympic medal in 52 years. The Heilongjiang native also anchored Singapore to a stunning win over China in the final of the 2010 World Team Table Tennis Championships.

The STTA said Zhou Yihan (22 years old), Lin Ye (20) and Zeng Jian (19) will anchor the women's team for the next two Olympic cycles (2020 and 2024) while the association brings through a new generation of local-born players.

Changes are also afoot in the men's team, with world No. 41 Gao Ning, the country's top-ranked male player, taking on an assistant coach/player role. Gao, 34, is expected to retire after the 2018 Asian Games.

Feng Tianwei speaking outside of the Olympic Village

STTA added that it will focus on grooming Clarence Chew and Chen Feng for the 2020 Olympics.

As part of its plan, the STTA said it will launch a bursary for needy players in their youth development programmes. It will also continue to work closely with partners, including the Singapore Sports School and SportSG to "nurture a new generation of accomplished athletes" for the national team.

An STTA spokesman said: "We must be bold as there is too much to lose. We all need to play our part in ensuring our sport continues to prosper, so we are inviting all those who support this vision to join us."

Here is the press release from STTA.

The Singapore Table Tennis Association today announced a new high performance strategic plan to take it through to the 2020 Olympic Games in Tokyo.

The high performance strategy plan was developed by the STTA after a consultation session with key stakeholders including Sport Singapore, Singapore Sports School and Singapore National Olympic Council, coaches and players.

Rejuvenation of the national team to be future ready

Said STTA President Ellen Lee: “After the Rio Olympics, it is indeed timely for STTA to develop, rejuvenate and refresh our teams to be future ready.  Bold moves are needed if we are interested in challenging the top table tennis nations for honours.

“With competition becoming a lot keener, and with rivals like Japan catching up with Singapore, winning at the world stage has become a lot harder. We need to develop and rejuvenate our national teams to be future ready, and we need to place greater emphasis on the development of our youth players.”

Said Gao, who is 34 years-old: “This is a great opportunity which has been given to me by the STTA. I have always wanted to contribute back as a coach after my playing days are over. I am happy that I am given a chance, and will work hard and learn as much as I can from Coach Liu. It is my hope to help as many young Singaporean players fulfil their potential and win medals for Singapore.”

Said Clarence Chew: “I’m deeply appreciative of the opportunity to be able to train and study full-time and I will dedicate myself to doing my best and making our nation proud. It is any athlete’s dream to represent the country at the Olympics. I will continue to train hard and work towards my goal of qualifying for the Tokyo 2020 Olympics, and would love to have Singaporeans stand by us as we take the next step forward.”

Apart from Clarence, the STTA will be placing emphasis on the development of Chen Feng who had proven himself by earning the Rio ticket in the singles event.

Changes will also be made with the National women’s squad. Feng Tianwei, who has been a member of the national team since 2007 and who will be 34 years-old during the Tokyo Olympics,  does not fit into the STTA’s current plans for rejuvenation.

Said Ellen: “Feng Tianwei has been a cornerstone of the national team since 2007. She has brought many golden moments to the sport. We would like to thank her for all that she has done for Singapore table tennis, and we would like to take this opportunity to wish Tianwei all the best in her future endeavours”

With Zhou Yihan, Lin Ye and Zeng Jian in their early twenties, they will be able to lead the national team for the next 2 Olympics cycle.  The immediate task is to improve their world rankings in the next four years.  Meanwhile, the STTA will monitor Yu Mengyu’s injuries closely.

This will also give STTA between 4 to 8 years’ time to groom the next generation of athletes for succession.

Said Ellen: “With our strategy plans in place, we strongly believe that our younger generation of players will lead Singapore to greater sporting achievements, with the aim of scoring a medal at the Tokyo 2020 Olympics.  We also hope to field a local-born talent to the 2020 Tokyo Olympics.  We urge Singaporeans who have put their belief and trust in us to continue to support us.”

The STTA will also be placing greater emphasis on local youth development.  The STTA will continue to work closely with our stakeholders including the Singapore Sports School, Sport Singapore, the education fraternity, the athletes and their parents to provide high potential athletes with the best support in their pursuit of sporting excellence and nurture a new generation of accomplished athletes to join the national team.

"Together with STTA, we will do everything possible to nurture our high potential athletes.  We hope that this will begin the process of change that will eventually see more Singaporeans on the world stage.”

The school within school programme in the Singapore Sports School serves as a good pipeline for the intermediate squad (IS) and national team.

Together with SSP, we will develop more high potential athletes who are serious about pursuing sports at the highest level.

Currently, the STTA has a network of educational partners: Nanyang Technological University, Beijing Sports University, SIM University (UniSIM) and University of Liverpool that provides special admission or scholarships to high potential athletes in our national team.  These academic pathways will definitely benefit our high potential paddlers in the long run in terms of a career beyond their sports, and hopefully, this will encourage more local talents to pursue professional table-tennis as a career.

The STTA started the intermediate squad in 2015 to develop high potential local athletes for progression into the national team.
As the way forward, we will be promoting more local talents into the Intermediate Squad and eventually to the National Team to help increase the base of talents who can end up representing Singapore at major Games.

The STTA has narrowed the Intermediate Squad down to several high potential youth players and more support and resources will be made available to them.  We have high hopes that these local youths are able to take their sporting careers to greater heights.

The STTA will leave no stone unturned in our quest to get more Singaporeans, especially kids, into the sport, and producing more winners on the world stage.  We want to help promising young sportsmen and sportswomen who are struggling financially to achieve their sporting dreams.  These high potential talents will be given a boost from STTA to help fund their training and/or competition cost.

The STTA will be initiating a Bursary scheme in 2017 for needy families whose child is in our youth development programmes: Junior Development Squad, Youth Training Squad, School within School and Intermediate Squad.  The objective of this scheme is to support a child’s aspirations if the parents may not have the means to support the child’s training and competitions.  The scheme will provide subsidy to cover the monthly training fees and/or parents’ contribution for overseas training and competitions.

Finally, the STTA will constantly challenge ourselves and to raise the bar. We must be bold as there is too much to lose. We all need to play our part in ensuring our sport continues to prosper, so we are inviting all those who support this vision to join us.