SINGAPORE - Ellen Lee will be the Singapore Table Tennis Association's (STTA) president for a third term after winning the organisation's biennial election on Saturday (Sept 15).

The 61-year-old lawyer defeated challenger Toh Kian Lam, a former national youth paddler, and his team 3H during the 31/2-hour long biennial general meeting and election at the HDB Hub.

In a statement, Lee said: "This has been an exciting election and I would like to thank my members for placing their trust and confidence in my abilities to assume the office of President. We thank Team 3H for their perspectives which show their commitment to Singapore table tennis.

"It is my honour and privilege to be elected for the presidency position. I strongly believe that my newly elected management committee is a credible team which has a lot of passion for table tennis and strive to do nothing but the best for Singapore table tennis. I look forward to this opportunity to continue serving the sport, and to continue to make table tennis one of the popular games in Singapore.

"My newly elected team and I are committed to fulfil the STTA's mission to support and develop world-class table tennis players by identifying, nurturing and motivating aspiring table-tennis talents to become the best that they could be. Nonetheless, more time is needed to narrow the gap left by our senior players but the gap has actually narrowed. We have seen promising results from our youths and these achievements serve as a testament that our youth development programmes are bearing fruit and we are on the right path of grooming our high potential talents into world-class athletes. We are excited about the opportunities ahead and we encourage supporters with the same passion to come forward to work with us.''

Toh, 52, congratulated Lee on her victory. 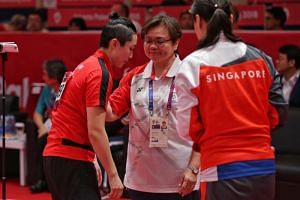 "At the end of the day, we all wanted to do something good for Singapore table tennis and we just wish them all the best," he added. "We, like all Singaporeans, will always rally and support the players. We hope that STTA will address the key problems which the sport faces today, including declining performances, succession problems and the inability to further groom our naturalised players."

According to the STTA statement, a total of 19 members were elected to the management committee to serve from 2018 to 2020.

Lee was elected unopposed during her previous two terms as STTA president in 2014 and 2016.

It is the first time in at least 10 years that the leadership of the sport has been contested.