SINGAPORE - No swooning crowd at the airport, no screaming fans, no VIP welcome - it was a markedly different scene that greeted Singapore's Olympic swimming champion Joseph Schooling as he returned home on Friday morning.

The hush-hush affair marked the start of a week-long stint back home for the University of Texas student, chiefly for a Singapore Swimming Association golf fund-raiser next Tuesday.

On Friday morning, the 21-year-old stopped by Tanah Merah Country Club's Garden Course to try out golf clubs, in preparation for the fund-raiser.

Schooling will also be making a series of public appearances starting from Saturday, when he will headline an event organised by Make-A-Wish Foundation and Watsons.

Guess who's back, back again. @joschooling putting at Tanah Merah Country Club, warming up for his golf fund-raiser next Tues. #kiasu 😅 pic.twitter.com/sibNmNDqWk 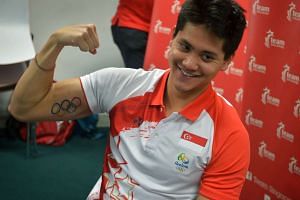 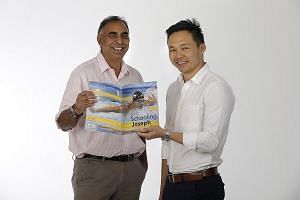 Joseph Schooling at SPH on Nov 21 for sale of biographies

He will also hold public book signing sessions, including one at the Singapore Press Holdings News Centre on Monday, when he will sign two books published by Straits Times Press.

The two books, titled Schooling Joseph and From Kid to King, are written by current and former Straits Times sports journalists.

Besides the golf fund-raiser, Schooling will also visit the Istana, where President Tony Tan Keng Yam will be hosting a tea reception for Team Singapore's 2016 Olympians and Paralympians.