SINGAPORE - Two years ago, he was "demotivated and demoralised" after failing to qualify for the SEA Games.

But Maximillian Ang turned those negative feelings into motivation. It paid off at the Liberty Insurance 50th Singapore National Age Group Swimming Championships on Saturday (March 23), when the 18-year-old rewrote the men's 200m breaststroke national record with his time of 2min 15.11sec in the morning heats, lowering Lionel Khoo's mark of 2:15.24.

"It feels amazing. I cannot believe I broke the record. This is what I have been wanting for a very long time. I have been working towards this," said the Republic Polytechnic student, who trains at the Singapore Sports School.

"I have been training for all strokes as an individual medley swimmer. But I wanted to specialise in breaststroke because I see an opening for me to become one of the top few in Singapore.

"I would love to qualify for the 2020 Olympics and maybe medal at the 2024 Olympics," added the Aquatic Performance Swim Club athlete, who finished seventh at the Youth Olympic Games in 2018 in 2:18.85. 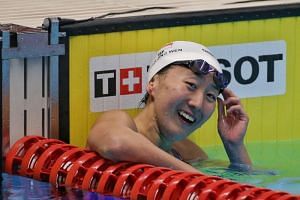 National head coach and performance director Stephan Widmer urged Ang to work hard, and backed him to go even faster.

He said: "If he improved quite fast over quite a short time, that means on a steep learning and improvement curve, he shouldn't be near his potential.

"This guy is on a good track, I hope he is more excited now and believes more in himself and his team and is ready to go for another step.

"I hope we will see another Singaporean swimmer say, 'Hang on, I can be someone'. Right now, we are talking SEA Games, then hopefully one day it's continental and one day it's world stage."

The Raffles Institution student said: "I am very happy with my swims thus far and very happy to have set three records. I was not expecting it and it totally surpassed my expectations.

"It's always great to break records, to keep pushing myself and see what I can achieve."

After meeting the World Championships 'A' cut for the 50m fly, Schooling said: "Today was a lot better than yesterday for sure, I'm definitely going in the right direction.

"I tried a different suit today, it felt a lot better, we are still fine-tuning the smaller things but it gives me and my coaches some direction to hop into practice with.