TOKYO (REUTERS) - Japanese swimmer Rikako Ikee, considered a medal contender for the Tokyo Olympics before being diagnosed with leukaemia in February, said on Wednesday (May 8) her treatment is proceeding smoothly but sometimes she feels her "heart might break".

Ikee won six titles at last year's Asian Games and also picked up two relay silvers to became the first female athlete to be named the Most Valuable Player at an Asian Games.

Her rich haul in the Jakarta pool propelled her onto the world stage and Ikee was expected to lead a new generation of Japanese swimmers at their home Games next year.

While announcing her diagnosis, the 18-year-old Ikee said she "couldn't believe it" and she has since been concentrating on treatment, although no details about her illness have been released.

In March, she said on Twitter: "This is dozens of times, hundreds of times, thousands of times harder than I thought. I've had many times where I haven't been able to eat for three days or more. But I won't give up."

On Wednesday, using a newly launched website, Ikee thanked fans for their numerous messages of support and said her treatment was proceeding smoothly but things were occasionally tough.

"I look outside every day and think that the wind in this season must feel good, and that I'd like to feel the rain, but this has become something to look forward to once I'm released," she said in a handwritten statement on the site. 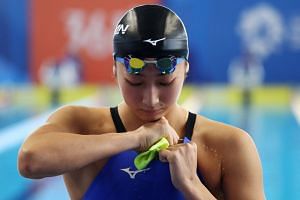 "It's going to be a long hospitalisation and long treatment, but I think of what I want to do when I get out and am staying positive," she said, adding she was spending her time doing puzzles, watching movies and other things she usually does not have time for.

"To be honest, sometimes it feels as if my heart might break, but all the things people have said help cheer me on, and builds up the feeling that I want to keep on fighting and won't give up."

Ikee's coach has held out hope that she could still compete in the Tokyo 2020 Olympics, which start in late July 2020, but she will miss the swimming world championships in Gwangju in July.