SINGAPORE - Singapore's only Olympic champion Joseph Schooling has announced that he has turned professional, after the conclusion of his final National Collegiate Athletic Association (NCAA) Division I Swimming and Diving Championships on Saturday night (March 24).

"Looking back, I would say I can be proud of my amateur career in general," said the 22-year-old, who won the 100m butterfly in a Games record of 50.39 seconds at the Rio 2016 Olympics, in a press statement yesterday.

"No doubt, as with every journey, I have had to endure some lows as well as some highs; but every experience has helped me become the person I am today."

His father Colin said: "We are aware of the intricacies that come along with being an athlete going to the next step in his career, and we believe we have the resources capable of easing the transition."

Hugo Boss will release a series of short video clips starring the butterfly specialist, with the full video to be revealed at the reopening of its store at The Shoppes at Marina Bay Sands on May 25. The unisex brand has developed a capsule collection in collaboration with Schooling, to be available on the same day as well.

"It is a tremendous honour to be part of such an iconic brand," Schooling said. "Being a Boss brand ambassador is significant to me because the brand's focus on quality and authenticity resonates with me on a personal level."

Hugo Boss South-East Asia managing director Steven Lam was "excited" to have the swimmer on board, saying: "As a youthful talent with a relentless drive for success, he is a perfect fit for the brand."

Product endorsements are not new to local athletes. Other Singaporean athletes who have been brand ambassadors include former footballer Fandi Ahmad, who has endorsed products from Royal Sporting House and Uncle Tobys, and swimmers Tao Li and Amanda Lim, who were ambassadors for a campaign by swimwear label Speedo.

Schooling is expected to announce more commercial partnerships in the following days. NCAA has strict rules governing the amateurism of its athletes, and forbids them, with certain exceptions, from receiving salaries or prize money that is more than the expenses incurred during competitions.

Formerly a student at the Anglo-Chinese School (Independent), Schooling left to train and study at the Bolles School in Florida in 2009, with his parents spending more than $1 million to groom their only child. 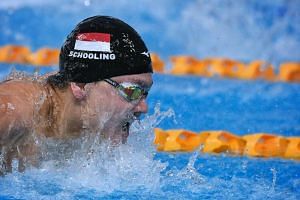 Schooling was among the first recipients of the Singapore Sport Institute's Sports Excellence Scholarship in 2013, and enrolled in UT in 2014 on a scholarship.

On Sunday, Schooling closed his collegiate career with a fourth team title with the Texas Longhorns, but did not win a medal during the four-day meet in Minneapolis. He clocked 1min 43.34sec in the men's 200-yard fly to finish 26th in the heats, and did not make the final. His Singapore team-mate Quah Zheng Wen, 21, placed sixth (1:40.70) in the final.

Earlier in the meet, Schooling finished 13th in the 50-yard freestyle, and fourth in the 100-yard fly. He was also part of three Texas relay teams which failed to win a medal.

Correction note: An earlier version of this article implied that actor Chris Hemsworth and golfer Henrik Stenson were no longer with the label. We are sorry for the error.