SINGAPORE - Four-gold Olympic swimming champion Libby Trickett believes the Australian women have the potential to upstage the US swimmers at the July 21-28 Fina World Championships in Gwangju, South Korea, but stressed that the ultimate goal is to deliver at the Tokyo Olympic Games next year.

Referring to the likes of Olympic champions Emma McKeon and sisters Bronte and Cate Campbell, as well as teenage freestyle swimmer Ariarne Titmus, the Australian told The Straits Times on Thursday (July 4) at the National Youth Sports Institute (NYSI): "We love being the underdogs, we love having those challenges.

"Our women's team is really strong and we need to focus on the Olympics next year, because we have in the past done really well in the world championships the year before, and haven't been able to consolidate that the following year.

"So if we don't win or don't beat the American team (at the world championships), there's nothing to be ashamed of - our focus is on the Olympics next year."

Trickett, 34, was in town as a guest at the Singapore Olympic Foundation-Peter Lim Scholarship awards ceremony on Wednesday.

She spoke to ST on Thursday after a sharing session with young swimmers and their parents, as well as staff from the Singapore Sport Institute and NYSI.

The session was moderated by national swimming head coach and performance director Stephan Widmer, who was her former coach.

Wearing a smile as sunny as the yellow prints on her dress, Trickett shared stories of her experiences and gave advice on matters ranging from swimming-specific tips to guidance on body image issues.

The Australian and US women swimmers each won five golds at the 2015 world championships in Kazan, Russia. At the Rio Olympics the next year, however, the US took eight of the women's swimming titles, including two of the relays, while Australia won just one gold in the women's 4x100m freestyle relay. 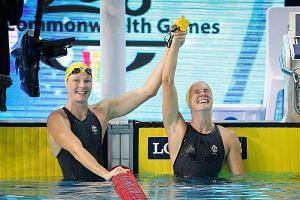 On how the Australian swimmers can translate a strong performance at the world championships to next year's Olympics, Trickett said: "We need to think about the mental preparations. Physically, we're great, we have incredibly talented swimmers.

"It's about how we can get ourselves best prepared to stand behind the blocks and do our race process, and not be overwhelmed by the occasion - and that's (for) any athlete competing at the Olympic Games.

"We need to make sure our athletes are not thinking about that, we need to think about what the race process is and get into that real clinical mindset."

The Australian women swept the 4x100m medley, and the 4x100m and 4x200m free relay titles at last year's Pan Pacific Swimming Championships, and Trickett feels they have a good shot of repeating that feat at the world meet.

Referring to the 2001 world championships, where Australia eclipsed the US as the best swimming nation, she added: "A year out from the Olympics, it would be quite a statement to be able to pull that off again, but it's a huge mountain to climb as an entire team.

"What all the athletes can do is work on their race processes and this is an amazing stepping stone to implement what they hope to do next year, learn and do better."

At Thursday's sharing session, Trickett also brought her 4x100m freestyle relay gold medal from the 2012 London Olympics, where she swam in the heats.

Though she described having that medal as "bittersweet", Trickett said it is also the one whose story she most enjoys sharing.

She had returned to swimming in 2010 after retiring the year before, and at the 2012 Olympic trials missed out on a spot in the individual races.

"This was the moment I really realised now important the team is that you work with and the journey that you will all go on as a group. And how lucky I was as an athlete that not only did I have an amazing support team, they were also working towards my goals," added Trickett.

"It was a real struggle just to make the team, and the fact that I got to walk away with a gold medal at the end of it was something that I'm incredibly proud of as well."