France basked in the glow of six boxing medals in Rio, including golds for super heavyweight Tony Yoka and his now wife Estelle Mossely.

But three days before the end of the Olympic tournament, boxing federation Aiba removed its then executive director Karim Bouzidi from his role because he was accused of favouring fighters from certain countries, according to Le Monde's report.

Le Monde, which carried out the investigation with Bulgarian newspaper Bulgaria Today, said it had seen the internal Aiba report and e-mails that showed the body was concerned Bouzidi had influenced the decisions of so-called five-star judges in Olympic bouts.

An e-mail from Aiba's then-president Wu Ching-Ko dated November 18, 2016 said the body suspected Bouzidi of acting with another senior official to influence the judges, in particular those featuring boxers from France and Uzbekistan.

Bouzidi did not reply to AFP's request for a comment on Monday.

Andre Martin, the head of the French boxing federation, told Le Monde: "The results in Rio were not 'stolen', they are honest. It's true that we knew Bouzidi but we never blackmailed him."

Aiba's internal investigation found that Bouzidi had the power to appoint the referees and officials for competitions, but added there was no direct proof that these changes influenced the results of fights.

Bouzidi's arrival in the senior Aiba ranks coincided with a campaign by France to try to improve its Olympic boxing results after disappointing performances at the 2008 Beijing and 2012 London Games.

One part of the strategy involved setting up a franchise to take part in World Series Boxing, an international competition aimed at swelling Aiba's coffers.

Kevinn Rabaud, the former coach of the French team in the WSB series, said they had done nothing wrong.

"We always played by the rules... We organised events in France so that the athletes could become better known. If the fight was close, it might play in the boxer's favour if they were better known. 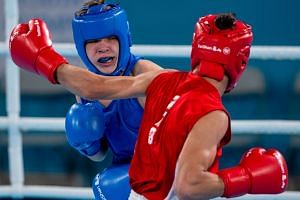 Olympics: Boxing still on the ropes after IOC freezes planning for Tokyo 2020

"In Rio, we got results thanks to our reputation and our previous results."

Boxing is already facing the threat of expulsion from the 2020 Tokyo Olympics. Its inclusion depends on the outcome of an investigation into Aiba by the International Olympic Committee, which has presented the body with a list of 41 questions via audit firm Deloitte, who will then report back to the Olympic body.

Controversial Uzbek businessman Gafur Rakhimov, who the US Treasury Department has linked to "transnational criminal organisations", stepped down as Aiba president on Friday.

Relations between the IOC and Aiba were hit hard at the 2016 Rio Olympics when 36 officials and referees were suspended amid allegations of bout fixing.

Rakhimov insists the allegations against him are "politically motivated lies".

His emergence as amateur boxing's head in 2018 was only made possible by a series of scandals and accidents of circumstance.

Wu resigned in 2017 amid claims of multi-million dollar accounting fraud.

Italian Franco Falcinelli then resigned the position just months after taking over, allowing Rakhimov - the next most senior vice-president - to step up to become first interim and then permanent president.