The 2019 edition of The Straits Times Run will see one of its youngest participants in five-year-old Ashton Ong.

He will participate in the new 3.5km Fun Run, which was created to mark Singapore Press Holdings' 35th anniversary, with his family.

His family comprises parents Danny Ong and Christine Chew, and Ashton's two siblings - Emilee, nine, and Brigton, 12. They will be joined by his parents' 14-year-old godson Damien.

Ong, 43, an aquatics educator who teaches people with special needs how to swim, participated in last year's ST Run with Brigton and Damien.

He said he was impressed with the ambience and organisation of the 5km race. "(The run) was not tedious - while we were jogging, there were people cheering and live performances under one of the bridges, which made the run interesting.

"There were different activities along the way to keep us motivated."

The Ong family of five also participated in the 5km category at this month's Osim Sundown Marathon. 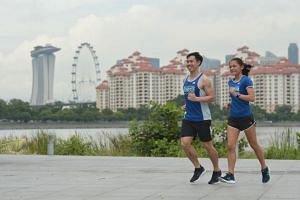 Early bird discount for ST Run extended by a week

Ong said the fact that Ashton completed that run was "amazing", adding: "I told my wife to let him try and if he really cannot complete it, it is okay.

"He managed the race quite well - he ran the first one-third, then eventually got tired so he walked, but he completed the whole 5km."

Ashton and Chew, 38, are looking forward to more family bonding time at the Sept 29 ST Run.

Asked what he enjoys most about running, the boy said: "I get to run with (my parents)."

Chew, a valuer, added: "It is good family interaction time when the kids can be away from their gadgets. Even when Ashton couldn't run during the 5km (at the Sundown Marathon), we spent a lot of time talking and looking at the scenery.

"So, it is a very good (chance) to interact with family, and 3.5km is very manageable for his age."

Though Brigton and Damien do not display as much enthusiasm for running as Ashton, Ong believes that running together is an important activity.

They frequently swim and cycle together as well. Ong said: "I think it is important to maintain an active lifestyle as a family.

"It is not just about doing activities as a family, but also to push their limits and (learn the importance) of perseverance and not giving up. It is important to finish what we start."

• To sign up for the ST Run, visit www.straitstimesrun.com