SINGAPORE - With clear skies above, over 13,000 participants took part in the seventh edition of The Straits Times Run on Sunday (Sept 29) morning.

Just over 4,000 runners, participating  in the longest distance - 18.45km, created as a nod to the year the national daily was founded - were the first to be flagged off from 5.30am at the start point on Nicoll Highway.

Among them was Paralympian Dr William Tan, who became the ST Run's first official wheelchair racer.

Conditions were cool, and the haze, which had threatened to disrupt several sports events in the weeks prior, was not an issue, with the one-hour PM2.5 concentration at 24-33 micrograms per cubic metre at 5am, in the Normal range.

The Smart Local employee is also the ST Run's ambassador.

The women's race, meanwhile, was won by Japan's Maki Inami, who successfully defended her title from a year earlier, with a 1:11:55 run.

They were later followed by over 8,000 others, who took part in the 10km and 3.5km events that flagged off at 7am and 7.45am, respectively. The 3.5km race replaces the previous 5km event, and marks the 35th anniversary of ST publisher Singapore Press Holdings.

This year also saw the introduction of the SPH35-Panasonic Schools Challenge - a 3.5km race - that aims to give all participants the chance to represent their schools in a competition outside the National School Games. 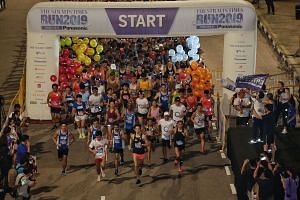 There are two divisions: one catering to those in tertiary institutions and the other for secondary students aged 17 and under.

Hwa Chong Institution swept both boys' titles, with Ethan Yan winning the tertiary title and Aeron Young winning the U-17.

All race categories in the ST Run ended inside the National Stadium. It is one of only two mass runs to do so.