SINGAPORE - If 2018 could be a snapshot for Toh Wei Soong, his triumphant outings at the Commonwealth Games and Asian Para Games would be just a small part of a longer journey.

The way he sees it, he visualises life as a bigger picture that cannot be presented in just one frame.

And, far from admiring his impressive work last year, which earned him a nomination for The Straits Times' Athlete of the Year award, the swimmer wants to express and better himself, be it through writing, doing outreach, through social causes and, of course, swimming.

As the 20-year-old told ST: "This year, I would like to carry on the momentum of 2018. The principal in my junior college had a saying, 'Start strong, stay steady, end well'. I have taken that to heart.

At last April's Commonwealth Games on Australia's Gold Coast, Toh, who races in the S7 classification owing to the neurological condition transverse myelitis that limits the use of his lower limbs, won a bronze medal in the 50m freestyle, becoming the second Singaporean to win a swimming medal at the meet following Joseph Schooling's exploits in 2014.

But his finest hour came six months later in Jakarta. He won the Republic's first medal at the Asian Para Games - gold in the 50m free and followed it up with another gold in the 100m free and a bronze in the 50m backstroke. 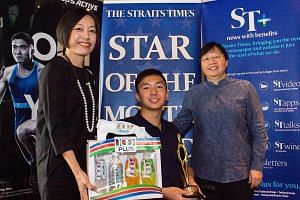 Though his medal haul is impressive, it is his attitude that makes him special, according to Toh's coach Ang Peng Siong.

The former national swimmer said: "Wei Soong is driven if he decides on something. An inspirational moment was when he stood up to compete against able-bodied swimmers at championships. It takes a person with character to step up, not think about anything else and just achieve their goal."

But Toh feels he has so much more to give outside of his sport, saying: "Things were neglected when I was in school as I have lots of other interests, lots of plans and lists of movies and books I want to watch and read.

"There's a great magnetism to these things, but I had to put them off until I finished schooling."

So last July, he wrote a novella about Otto, a rat trying to find his way in the world. He also visited Canberra and Meridian secondary schools to do outreach.

And, come August, he will enrol in the National University of Singapore, where he will apply his critical thinking skills in the philosophy, politics and economics programme.

He explained: "I always like to test myself and see what I could do when given the chance.

"(Fellow swimmers Yip) Pin Xiu and Theresa (Goh) are my inspiration and now I can use my position to try to explain to students my story and show that it is not impossible (to taste success). My achievements don't seem as important as what I do in the schools."

Toh, who trains at the APS Swim School Singapore at Farrer Park, is also working on a project to conserve the historic site.

Last June, he started a website called The Lives of Farrer Park: Celebrating a National Sporting Legacy which collates stories of the place as told by past and present athletes as well as residents.

And that is perhaps the essence of the soft-spoken and deep-thinking young man, who sees a larger purpose than just fighting for swimming medals.

As he said: "The achievements always look wonderful and seem very definitive but, if you look at them as memories, they don't seem as potent. They seem diminished and faded. I am very happy (with the achievements) but I realise it's just one year in a bigger picture.

"Last year was a stepping stone and that's what every year in life is, it is going to lead to something else."