Muhamad Ridhwan will take his fists to wherever there’s a title and a fight. Find a city, put up a ring, offer a purse and he’ll show up. His punches travel and he gets hit for money. He’s the professional who bleeds and boxes for his daily bread. This is his livelihood and he loves it.

You may wish to swot in law school or frame your medical degree. Very nice. But it’s not the only way to make a living, even for Singaporeans. Some people trade in currency, others in pain. Some dive into paperwork, others into pools.

Scholarship is useful but swishing a ball through a high net also pays. Wong Wei Long plays basketball in Indonesia on contract and, like him, Singaporeans are lugging their skills across borders. Hariss Harun is showing off his football brain in Malaysia while Choo Tze Huang is hammering golf balls around Asia.

This is a hardy breed and in Singapore a gradually growing one. It is a wandering gang, of conviction and confidence, who rely on their hand-eye coordination to pad their bank balance. They sometimes share hotel rooms, count their pennies but somehow earn a living and cut a path for others. They are the professionals who deserve recognition for turning their passion into their trade.

Sport has a long history of amateurism and if playing sport simply for the sake of it was noble, it was also financially distressing. Medals don’t pay bills. In 1936, after his four golds at the Olympics, a worn-out Jesse Owens was sent by his association to run in European exhibitions. When he arrived at Cologne airport, wrote Donald McRae in the Guardian, “he had no money ... leaving a fellow passenger to buy him some milk and a sandwich”.

Athletes deserve a more dignified life and a finer reward than the free haircuts Spyridon Louis received for winning the Olympic marathon in 1896. Some sports such as kayaking and shooting will never make a Forbes rich list and these athletes do it for love, personal bests and little applause.

But, as the sporting landscape in Singapore expands, as Asian leagues sprout, as families take risks, a living can be made in other sports. Not just for footballers, but boxers; not only for a table tennis player, but a swimmer. 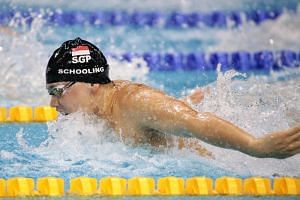 Swimming: No medal for Joseph Schooling as he finishes fourth in Fina World Cup

Swimming: I like being challenged, I have full faith in myself, says Schooling despite his world championship flop

There’s still a vast leap in ambition and effort we have to make, but as our weekly series – which starts today – documents, athletes are ready for the professional struggle. Feng Tianwei built her own five-person team and Joseph Schooling has his own manager. Mindsets are shifting but unfortunately faster than corporates dip into their pockets. It’s hard to go fast when sponsors are slow. Invest in athletes, fellows, take a chance. Don’t wait for them to be famous, help them to get there.

Only a glimpse at Schooling’s website can make you crack a grin – DBS, Borneo Motors, Canon, Boss, Milo, One Championship, Speedo, Tag Heuer, Toyota, Yakult. He has more sponsors than space on his swimsuit. It has taken the ultimate prize, Olympic gold, but fine talent has found appropriate reward.

The unthinking cynic will say sponsors distract him, as if, at 24, he’s still supposed to subsist on fresh air and daddy’s wallet. No, he’s earned this and unlike you his gift will erode. You can continue your accounting practice till 70, his athletic ledger will be full by 30-ish.

But his challenge, like any celebrated athlete’s, is to discover balance, to walk the tightrope of success, to find time to pose for sponsor, refine his talent and rest his body. For every professional, the struggle is personal.

Some athletes have changed countries as Feng did and others leave wives and kids at home. Some fight loneliness with late-night phone calls and others drive down foreign roads with only golf clubs as company.

Some sit in hotel rooms after defeat with the walls closing in, counting unpaid bills and somehow reassuring themselves that next week will be better. Some make money and drive a Mercedes but all pray for a healthy body. There is no pay for no play.

Even when he’s exhausted, Schooling will rise and make himself a protein shake before bed. It’s a small thing but part of the unadulterated commitment the professional must make to a full-time, all-in sporting life.

But mostly it’s a brave life because it takes a beautiful belief to put your skill on the line every day. In 10 Asian Development Tour events last year, Choo missed the cut five times, yet he persists, he swallows disappointment and heads to the practice green. The professional endures. He might come from an academic nation and yet he’s sweatily committed to this sporting adventure of no regret.