Shim filed her complaint against Cho Jae-beom to police last month, on the same day she testified at his appeal against his 10-month jail sentence for physically assaulting her.

Aged 21, the elite athlete has four Olympic medals to her name, including relay golds at both Sochi 2014 and on home ice at last year's Pyeongchang Games.

Shim told police that her coach sexually violated her from the age of 17 until last January, a month before the Olympics, her lawyer said.

"This is a grave crime that our society should not overlook," Im Sang-hyeok told AFP.

Some of the incidents took place at government-managed sports training centres, he added, demonstrating how vulnerable sports players can be to loopholes in the state management system.

South Korea is a regional sporting power and regularly in the top 10 medal table places at the summer and winter Olympics. 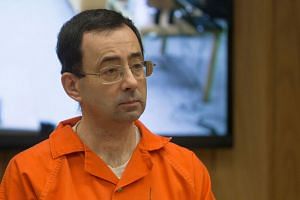 But in an already intensely competitive society, winning is everything in its sports community - where coaches hold immense sway over athletes' careers, and physical and verbal abuse are known to be rife.

Shim "kept it all to herself" until recently, lawyer Im said of the sexual assault allegations, "in fear of the potential stigma she could face as a woman and impact on her family as well as reprisals by Cho".

She "mustered up the courage" to reveal the case in hope of preventing other athletes suffering similar fates, he added.

Cho has admitted beating athletes "to improve their performance", but denies the sexual assault accusation, according to South Korean broadcaster SBS.

Shim did not mention the issue at his appeal hearing at the request of police, her lawyer said.

She told the court that his physical violence began when she was seven and "kept escalating" as she grew older. On one occasion she thought she "could die here" as he kicked and punched her, she said, breaking down in tears.

A ruling in the assault appeal is expected on Jan 14.