SINGAPORE - From Woodlands in the north to Kallang in the south, this tiny island of 5.39 million came together, if just for a fleeting moment.

They were "aunties" doing their Saturday supermarketing, kids in the middle of football training, a couple who had just received their keys to their new HDB home, old men meeting up with their kakis for breakfast and a weekly yak.

All to watch one boy make history. A boy who loves carrot cake and char kway teow, grew up near Bedok Reservoir and studied at Anglo-Chinese School (Independent).

And in realising his dream of Olympic gold, he also realised theirs.

At the HDB Hub in Toa Payoh, over 100 people turned up to watch Schooling's race, two of whom were accountant Jasmine Ong, 38, and her four-year-old son Ren Jie.

Said Ong: "I think it's the biggest birthday present for Singapore's 51st birthday." 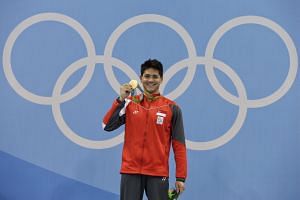 Also present at Toa Payoh was engineer Chandra Segaran, who was all smiles after Schooling touched the wall first to win gold, ahead of the American legend Michael Phelps, South Africa's Chad le Clos and Hungary's Laszlo Cseh.

"For a tiny nation like Singapore to get a gold medal at the Olympic Games ... it's fantastic," said the 58-year-old.

"Schooling is our local talent and we should all be proud of him - he's our golden boy!"

About 50 Singaporeans gathered at the OCBC Aquatic Centre broke out in riotous cheers as Schooling won Singapore’s first gold medal at the Olympic Games.

The crowd cheered throughout the 100m butterfly final and many leapt for joy when Schooling touched the wall in a record time of 50.39sec - an Olympic record.

Former national swimmer Joscelin Yeo, who was at the OCBC Aquatic Centre with her family, said: “I’m at a loss for words, I’m just so happy, so proud of him.”

She and the other supporters stood at attention and sang as the Singapore national anthem was played at the medal award ceremony.

Oon Jin Teik, Singapore Swimming Association secretary general, who was also at the OCBC Aquatic Centre, admitted he needs "some time to digest because this is a heart attack moment".

He said: "(The feeling) is so difficult to describe in words. The feeling of this historic milestone for Singapore, for the sports people and more importantly, the common people on the ground - it just shows that if you put your mind to doing something and if the opportunity is given to you, you can excel and even go on to be number one in the world.

"We all prayed and hoped for it but we never expected this because swimming in a 100m is so vulnerable to a split second. If you look at the second, third and fourth-placed (swimmers), they're all about the same timings. Joseph has given Singapore not only something to shout about but also something to remember for the rest of our history for the next 50 years."

Mr Baey Yam Keng, Parliamentary Secretary  for Culture, Community and Youth, who was with the SSA fraternity, added: "Together with the crowd here, we are all ecstatic. What he has achieved - an Olympic record, what more can we ask for? It's really a great motivation and encouragement, and a great gift for Singapore's birthday...  Also for Singapore, a small country like us to produce such a swimmer on the world stage with such results is really wonderful."

Over at the Chinese Swimming Club, some 60 people showed up, mostly young swimmers and their parents after their morning training session. As with most Singaporean gatherings, food was also present, the casual breakfast affair featuring parents bringing in snacks and buns.

Straight after his historic golden feat, Schooling told Singapore media in Rio de Janeiro: "This swim wasn't for me. It's for my country.

"Some people believe that Singapore has a lot of talent. I believe that. It doesn't matter where you're from really. I hope this opens new doors for sports in our country and I hope I've set a precedent for the young in our country."

Going by the reaction among the young ones in the Chiinese Swimming Club crowd, he has left an indelible impression.

Said Gan Ching Hwee, 13: "I didn't expect him to win the gold, I thought it would be bronze. He was like a body length ahead from the rest. I was cheering on for him. He did Singapore proud. Definitely (inspires me). He's now an idol to me. My goal is to go for the 2020 Olympics, I hope I can win like him."

Claresa Liau, 12, added: "I'm inspired by him because it shows that if you put in the hard work, you can do very well. I want to go to the Olympics some day but right now for my short-term goal I want to make it to the SEA Games first and then afterwards we can maybe talk about going to the Olympics."

Benedict Boon, 19, who swam at last year's SEA Games, noted: "I'm very motivated after this. I didn't perform very well at the last SEA Games so I definitely want to win a gold at the next one. You can see that nowadays sport in Singapore is very strong and it brings the entire country together. If the entire country's got your back and supporting you then I think anything is possible."

"From (Joseph's) heats to the semi-finals to the finals, everyone's been supporting him. For a sportsman it really inspires not only me but athletes in other sports."

Former national coach David Lim, himself a former Olympian who also coached Schooling briefly: "That's why we screened the race here for all these young swimmers to watch. We want the children to witness it to inspire them. Not everyone is going to be an Olympic champion but at least when they witness it they can use that energy to inspire themselves."

At the Woodlands Stadium, where a live screening of the race took place in the stands, a crowd of about 120 stopped their various activities to watch Schooling make history.

"We're such a tiny dot and to win a gold medal is a special day for us. I don't think even Malaysia has won an Olympic gold medal before," said warehouse sales executive, Soon Ning Fong, 43, who was part of a group of women who were there for a zumba class.

Some are already predicting a new wave of Singapore sporting heroes to come.

"This is going to have a macro-level impact on Singapore like we've never seen before. The last time when we won the Malaysia Cup, you saw every boy starting to play football. It's going to be the same thing," football coach D. Ramanathan, 44, who was training a group of primary school players at the stadium.

And some are hoping the new fervour will not just be for swimming but for all sports.

"We feel deeply emotional to witness something that happened for the first time in our lives. Hopefully the kids here can treasure this moment, and have the passion and drive to excel in sports. And maybe in 10 years' time, we can qualify for world Cup, nothing is impossible," said  technician Muhamad Sahfinye, 46.

PM Lee Hsien Loong posted a message of congratulations on Facebook minutes after the race.

"It is an incredible feat, to compete among the world’s best, stay focussed, and emerge victorious," he wrote.

Changi Airport Group put up a post on their Facebook page announcing the "arrival of Singapore's first Olympic gold medal".

Before the race, Singaporeans gathered at live screenings around the island morning to cheer Schooling on.

His father, Colin Schooling, 68, also sent his love and support from Singapore in a video.

Singaporeans will support you whether you win or lose, he said, but added "I want you to stun the world".

"All the best son, I love you," he concluded.